Survey123 project with existing data, base on existing features or related tables?

Hi, I am currently working on a Survey123 project for surveying known addresses.  I will be using an Enterprise Portal and build the survey in Survey123 Connect.  The survey will have pictures as attachments.

We want to be able to create detailed survey at each address, and show the progress of the survey in a webmap, as they are completed.. status for example.

I have an point address feature with address information and a addressID. (14k points)

I have successfully created a CSV and used the select_one_external functionality to build a drop down for address selection.

I am looking for suggestions on what is the best solution.

I have looked at various posts and blogs about these topics, going back several versions and to 2016...

I feel I have been going in circles and chasing my proverbial tail...

Any help, guidance or suggestions are most welcome.

I think using the Inbox of the survey form will probably be the easiest approach. A suggestion as to how this could be achieved is to publish your survey form with the fields you require including 'hidden' questions for the attributes of your address feature class and then load all of the address points into the feature layer created as part of the publishing process using the Python API or ArcGIS Pro.

This should then populate the Inbox of your survey. There's a limit of 1000 records which will be displayed in the inbox; you can work around this by including a geopoint question within your survey which will enable the map option of the bottom of the inbox. By zooming to a particular area in the inbox map and hitting refresh, surveys only within the bounding box will be loaded, and should allow you to find a particular survey. If the geopoint question is set to "read only=yes" within the XLSForm, then the pre-determined location from loading in your address list will display within the survey, but won't be editable.

It's probably also a good idea to set up some sort of inbox query expression so completed surveys are excluded, and change the settings of the feature layer so that the creation of new features is disabled, ensuring that users can only search for and edit the details of existing surveys/addresses.

A submission URL tells a survey to point to a different feature layer - the inbox functionality should still operate the same as the feature layer created when publishing a survey.

Hopefully that makes sense? If not, I'm happy to elaborate further.

First off, thank you for your quick reply.

Everything you have said makes sense, and it has been informative.  I will tweak the survey and then follow your guidelines and let you know how it goes.  I will probably have a question or two.

Ok, so it has been a bit more complicated than expected.

Some issues with this:

The Survey when published, published as a point with z enabled.

Using an insert cursor, something I am used to when working in arcpy.da was not possible.

(the above cursor was a short one for testing... but I am thinking I could have added my GlobalID from the point feature?)

I am thinking there must be an easier way, eh?   I was planning to 'Append' but it seems that is only available in ArcGIS Online.

How can I set the reference system to something projected and local (same as my address point feature for example)?

The Z issue I can deal with, but I find it odd as I saw it stated somewhere that z enabled point features were not allowed? (or only on Windows mobile apps?)( I could be wrong)

When initially authoring the form, you can specify the coordinate system of the feature service by using wkid=<WKID_VALUE> in the bind::esri:parameters column.  It sounds like you selected an EsriPointZ as the field type; leaving this blank will default to a 2-D point.

Thank you for the quick reply.  Do I add this, for example, wkid=25832 to the bind::esri:parameters column of the geopoint?

When I try this, it fails to publish saying: 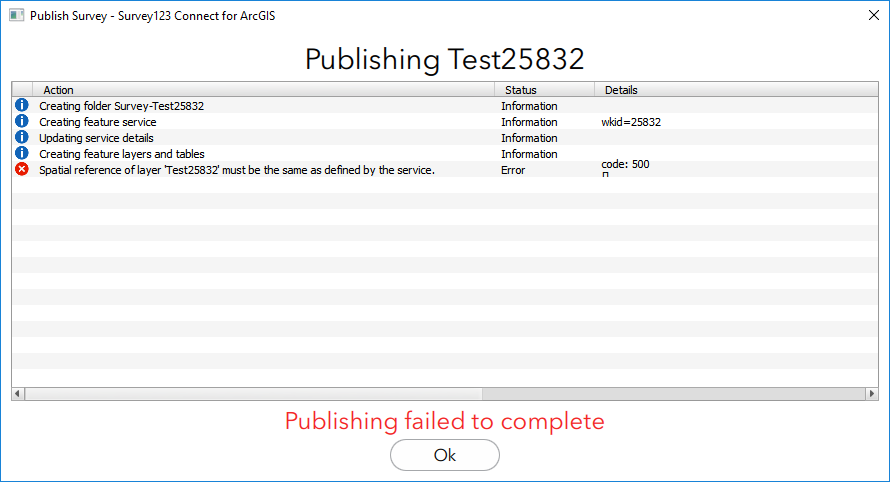 Any suggestions are appreciated.

Yes, you have the location to place the wkid correct.  I was able to publish a sample form with the WKID (UTM32N).  Does your form have more than 1 geopoint/geotrace/geoshape question?  This should be applied to all such questions.

It does not have any other geometry. (that I am aware of)

Thanks for trying it, but it is still giving me trouble, so the problem must lie elsewhere and I would love to figure out what it is.

I tried a new empty survey starting from Advanced template and added just a geopoint and set the wkid, it failed as before.

I did the same with a basic survey template, it failed as well.

I then created an new and empty feature service from my point layer in 32N.  When I created the survey from the feature service, I was then able to publish it in 32N.

The problem or headache with this kind of brings me back to my original question and problem...

The work flow would be to:

It's a lot of work for getting it where I want to be.

The wkid is set with a geopoint/geotrace/geoshape field, as you show in the screenshot (these are what I referred to when I said 'geometry').  Just to check, are you publishing to ArcGIS Online or ArcGIS Enterprise?

Yes, I am publishing to our Enterprise.

I have just pressed on in wgs84... I would love to get to the bottom of this, but we are squeezed on time.