The two main reasons for going to electronic data capture

123 has does great for us on part 1.  We now have forms that will not allow you to break any rules - and our rules are complicated to say the least.

But we still really struggle with 2.  I am not talking form load time but number of taps to get something done (taps = time).  It is consistently taking us a lot longer to use 123 then any of our legacy apps, making it hard to justify the ROI.  I personally feel that not enough time has been spent on improving data entry time.  Doing real world field testing would show a lot.

We did some intensive field testing yesterday and I want to share specifics on what we think would speed things up.

I am posting this in hopes of ideas or for others to echo these issues in the hopes of getting some movement on them.

Numbers appearance has no Enter/Return key 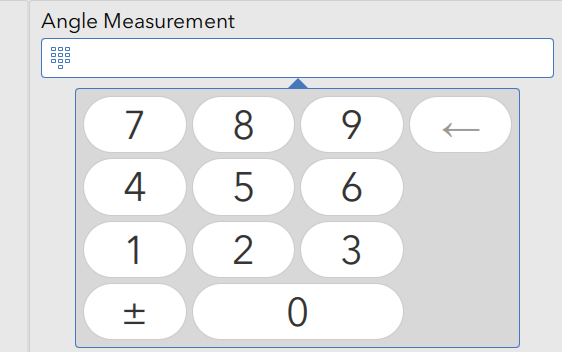 This means you have to tap somewhere on the form to commit it, then tap on the next field to get it to bring up the next numbers.  I know this was causing an issue with data not saved as well.  If you could just hit enter and it goes to the next field (like non numbers does) that would save the user a tap – so twice as fast.  This seems to work on text fields now so maybe it was just missed.

I know this one as been asked for before but it is really slowing us down.  Every other forms program tested has this.  Just adding a column for tab order would work great.

User adds a number to the first Thalweg Depth then hits enter.  It goes to Flow so the keyboard goes away.  Then they have to tap inside of Thalweg Depth 2 to get the keyboard back up, then add the number.  I would like to set the tab order to go straight down the Depth column – and make sure the keyboard stays up.  This is adding 2 taps and we do 100 to 300 of these per form on just this one part.

Keep keyboard up across repeats

When advancing a repeat the keyboard goes away.  This means the crew has to type, enter, advance repeat, tap field to get keyboard back, then enter again.  When doing 100-300 repeats this really slows us down.  Growing a repeat downwards would also work (and has been asked for a lot).  We often have one person calling out numbers as they walk a line while another enters the data.  The person on the tablet cannot keep up at all.

Ability to move between repeats like you can for pages.

For pages I can tap and go right to any page I want.  This is sweet. 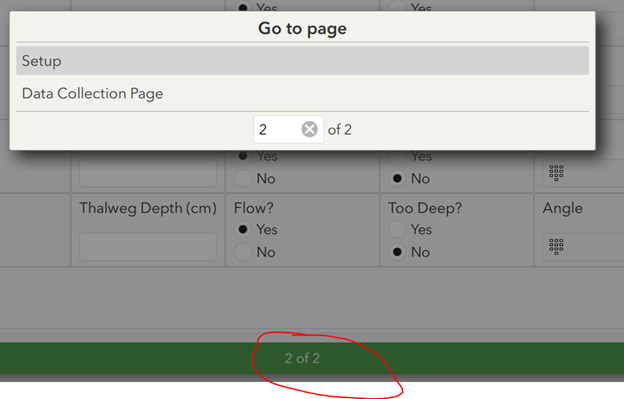 But I cannot do this for a repeat.  That means on large repeats the crew must tap hundreds of times to review data.

I would like to just tap here and pick the repeat.

Tied into this is repeat indexing where I can ask which repeat I am on.  Also being able to have a repeat move to a specific entry would be sweet.  BTW naming the repeat bar or adding a color coding is asked for a lot - when nesting repeats it can be really hard to tell which is which.

Thanks for your suggestions above, it would be great to hear from other users on their thoughts and ideas on these suggestions.

If you haven't already, I would also suggest logging these as enhancements with Esri Support and creating ideas on the ArcGIS Survey123 GeoNet Ideas page. This will help us understand the requirements, customer demand and prioritise enhancements such as these in the future.

Numbers has a return key idea.  But really I think this one was just missed.

Add a return key to the Numbers appearance in Survey123

Yes to every single one of these ideas!

Also I've seen it mentioned elsewhere and upvoted it but being able to select a choice list answer using the enter key would be extremely useful.

I'd also like to see the ability to add a new repeat using the keyboard - possibly by allowing the focus to be set on the plus sign and then selected with the enter key.

The overall goal is to be fully able to enter data using a keyboard. Not being able to navigate through the form without regularly using a mouse or touch screen is bordering on being a deal breaker for some of our applications where we need to be enter a large number of records quickly. It's particularly problematic working around water or in rain since as soon as touchscreens get any moisture on them they start to be a little finicky.