Users search for a locality. Once the locality is found, the user clicks on the map and has both the locality name and the region/district name populate respective fields in the form.

I do not believe it's possible exactly as you described.   Pre-filling the form is done by a constructed URL with parameters, which can't be done when drawing from more than 1 feature layer.   You could accomplish the 'place I would first visit' (IE: One place) by enriching your "district" dataset with another field that contains the "region" name (instead of trying to pull the respective values out of 2 different layers).

I cannot think of a way to let people pick a second place, though.

Here's one that I have embedded in a dashboard, with the "UAS Mapping (Completed)" list on the left being used to pre-fill some of the fields in the "Add New" S123 form (Could accomplish the same thing with pop-ups in that feature layer to launch in a new tab) 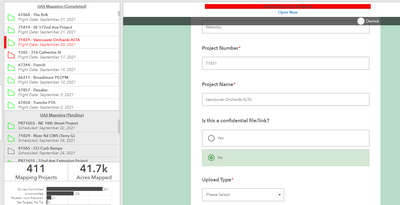 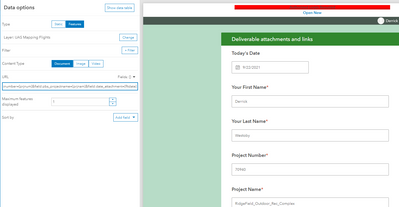 I suppose you might be able to accomplish drawing from more than one layer using the arcade expression functionality that's in there now, but I haven't ever tried.

Something that might be of use, considering you'd like to be able to click on a layer in the map and have information transferred to the form.