Installed the new 3.3.x versions available for download 2/26 - 2/27.   Having issues viewing the apps.  Missing spacing and header toolbar icons, titles etc....details.  Can't login with icon.  Is this just me?

Scroll to the bottom of that page and you should wee the following:

If you go into the Device Manager on your laptop, then to the Display Adapters section, you should be able to see the exact version installed on the Drivers tab of the Intel HD Graphics 620. This is mine below for the 520 version, which is outdated now by a few months. Try updating from this device driver page, if not manually download the update from the Intel website and install: 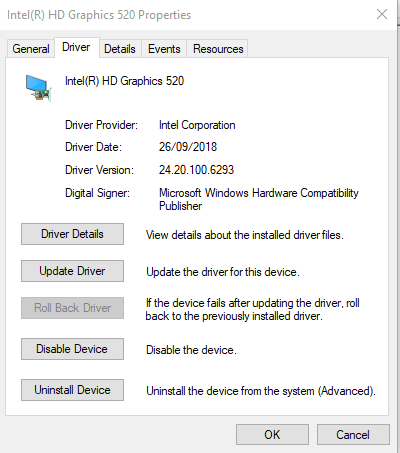 Hope this helps and works.

I have just downloaded Survey123 Connect and the Survey123 Field App to my Windows 10 Dell laptop and am not seeing this behavior. In the screenshot, it looks like you have 3.2 installed...can you please ensure that you uninstall all previous versions and then attempt to reinstall to see if the behavior persists?

Thanks Brandon. good to know...

I updated the above image, to show I'm have the newest version.  I was seeing same issue with the  version I downloaded yesterday 2/26 as well (must have gotten them before versions changed on your side).

I was previously using S123 without issue before yesterday when I attempted to update my version to the latest.

You know any windows settings that affects appsize?

Thanks again Brandon,  unfortunately my uninstall and reboot did not resolve the issue.   I still see header and spacing issues with the apps with the latest when installed.  As mentioned above I only updated the version yesterday previously apps were fine on my system. So not sure what changed. 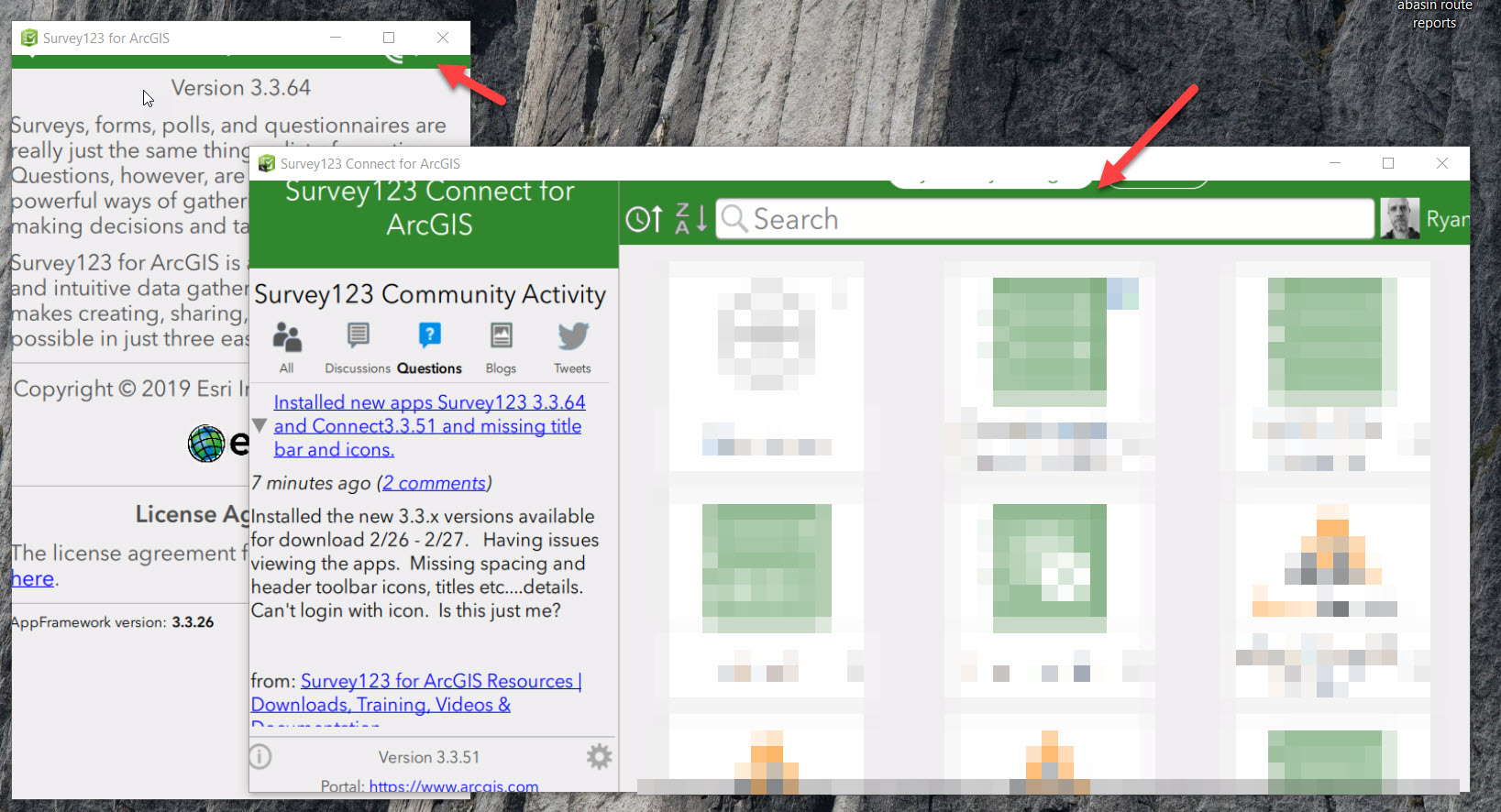 Here is my system info

Hi Philip thank you.  I can understand that however, I have been using survey123 Connect and Survey123 app for more than a year without issue until now.  To say it is not supported on windows home is questionable.

I do need to continue so If I am required to upgrade to windows 10 Pro to use certain functionality I can look into that, however I don't see how this affects the app to respond in such a way that I can't even view the app as before.

I completely understand your point of view, however the fact that app worked for the past year without issue is great, even though that platform is not officially supported. Windows 10 Home has never been supported for Survey123 or other AppStudio apps.

The reason it is not supported is that we use an underlying framework developed by the Qt Company and libraries from other sources, that the app is then built on. We therefore inherit the minimum supported versions of these and what their different supported OS versions are.

It is likely you are only seeing this issue now (I would expect it happened in 3.2 also) as both 3.2 and 3.3 are built on a different Qt version compared to 3.1 or earlier. With each AppStudio release, the Qt version is updated, and therefore when Survey123 is built it will get this new version. As Home is not supported, bugs and issues such as you have identified, will not be tested for or found as part of the release testing we do before each release.

Thank you for the prompt and detailed response.

I was optimistic, however upgrading to Windows Pro did not resolve the issue with the app spacing. I reinstalled and rebooted. So the mystery remains… ? 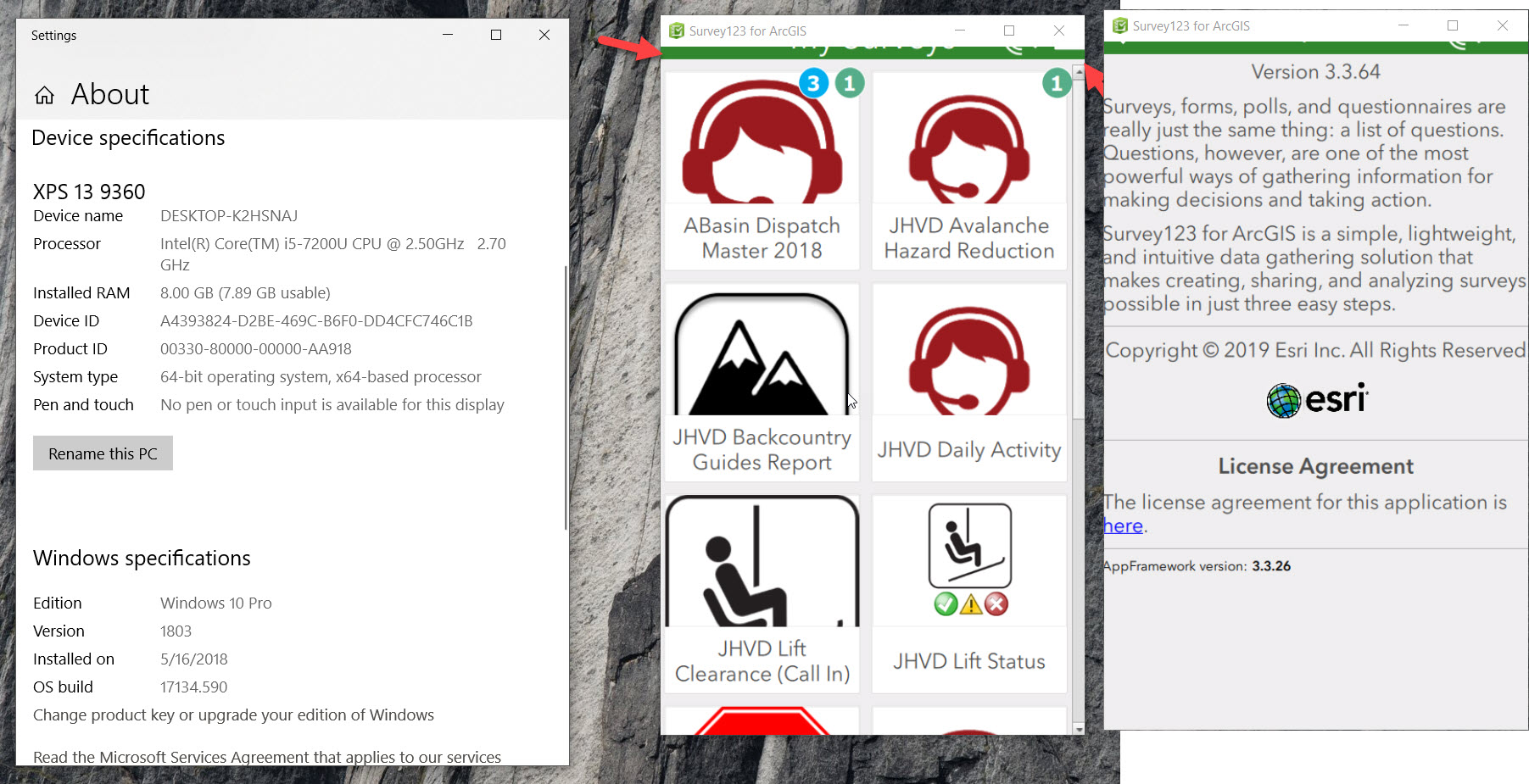 For sanity I re-installed previous version I had 3.1.158 and all looks as I expected. 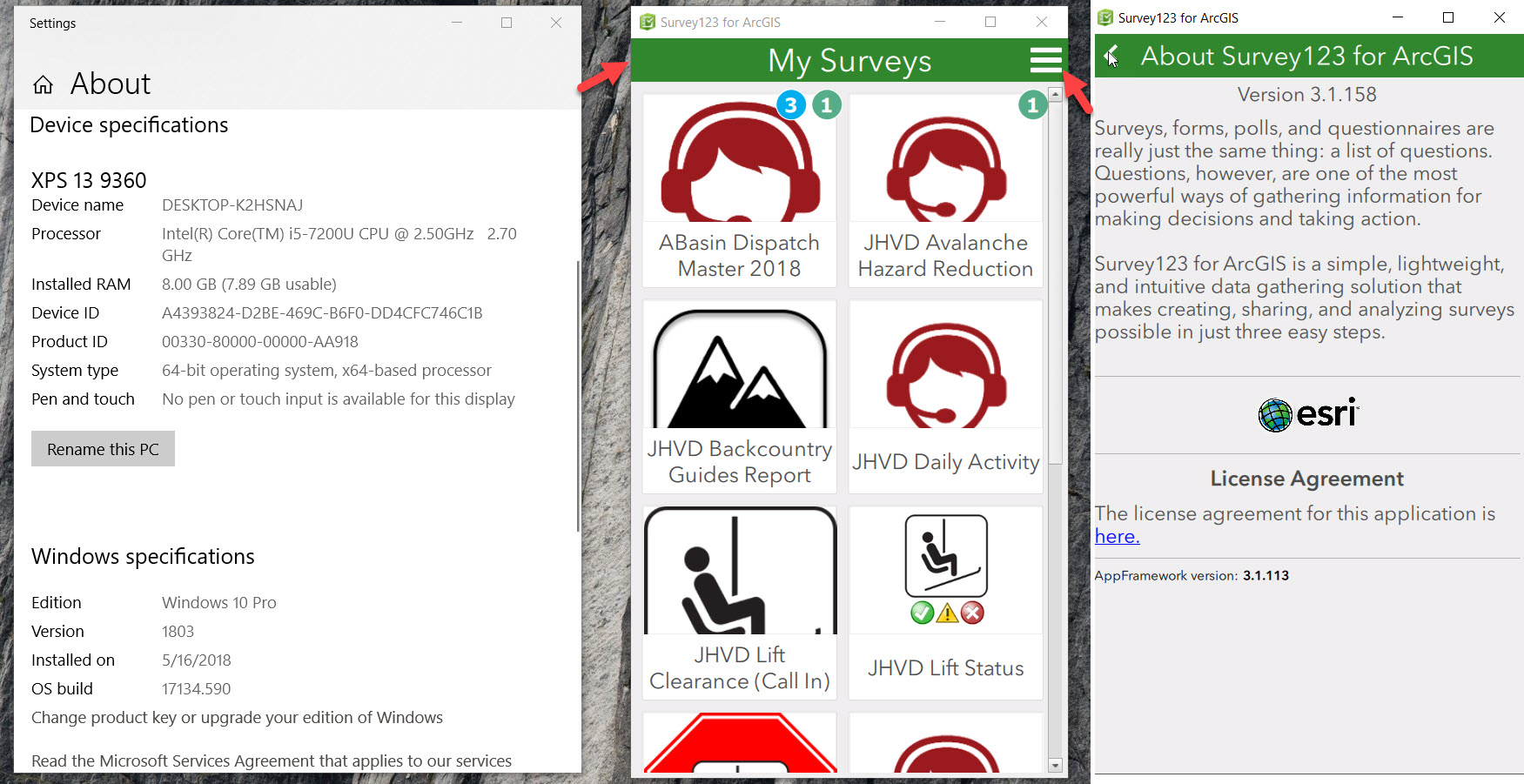 Good to know the last version you tested with that worked was 3.1, and not 3.2, as we would expect the same issue in 3.2 as you are seeing in 3.3, as I explained above due to the Qt version change. Have you successfully been able to use Survey123 3.3 on other laptops or desktops, or VMs?

Does the machine you are using meet all the minimum hardware requirements: System requirements—Survey123 for ArcGIS | ArcGIS

Also, can you make sure your graphics drivers are up to date (check the manufacturer website not just Windows update) and also that all that Windows updates and other system updates are all current.

The other option you can try is launching Survey123 with a different rendering engine, see support for this here using command line: Frequently asked questions—Survey123 for ArcGIS | ArcGIS

We have seen with other users and the latest version of the app that often the app does not load as they are using older out-dated graphics drivers that are not supported.