This idea is meant to allow for both the publisher of the survey and the surveyor using the survey to define a value for the query being conducted within the "Inbox" through an interaction from the surveyor prior to applying the refresh process.

The publisher would have the ability to specify a "question" from the survey that would provide the surveyor a list of choices for values that could be used within the Inbox query. This would require that the field have a "select" type question in order to help conform the query string being passed. It would something similar to the way we filter records on the "data" tab within the Survey123 website, but not as complex and would only use one field.

For instance I have a survey that we use to collect the same data schema across multiple project numbers. It would be great to give the surveyor the opportunity to select which project number they would like to have queried back into their Inbox. Otherwise, it requires the publisher to update the Inbox query per person per project and have them download the survey directly after the form with an updated query for their project.

It could look something like this below, where the Inbox would add the question into dialog and allow the surveyor to choose which value is passed within the query operation. 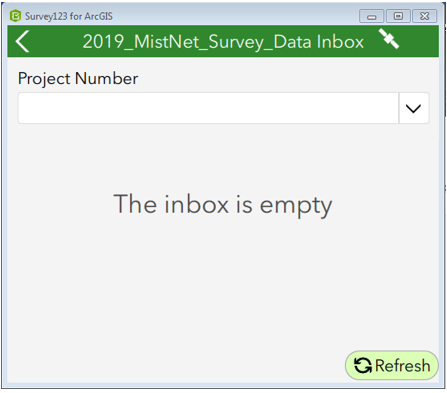 I was wondering about the same idea. I also would like to limit the queries for the surveys that the user submitted. In my data, it collects user information: Username, so if I can use the username for the initial query, the user can edit only his/her data. Then additional queries such as ID or dates for the dataset.

The following paragraph is about a quarter of the way down the page, but make sure that you read through the documentation to include repeats if your survey has them.

Inbox queries also support the username variable, to cause the inbox to only be populated by surveys that match the user's ArcGIS named account information. This variable must be specified in the same format as XLSForm expressions, so for example, the query Creator=${username} would search for all records created by the currently signed-in user.

Thanks for the info. I was testing if I can get the right results, and finally figured things out! For my database, this is good enough for now. But when someone submits so many data, then I need the user input filter in the inbox. It's not in Survey123 yet, right? Hope I didn't miss it anymore.

This functionality is not within the form yet, but I wonder if there would be another way to structure your query string to trim down the number of returned surveys?