Working with USNG and MGRS in Survey123 for ArcGIS

Survey123 provides great support for working with USNG and MGRS coordinates. Since this is quite important to a number of you I thought I would write a specific blog post detailing the basics, but also some more advanced techniques.

About USNG and MGRS

USNG and MGRS are two commonly used grid-based reference systems used to unambiguously express geographic locations. They provide definitive advantages over using latitude/longitude coordinate notations, and addresses, so they have become the standard among different communities. MGRS for example is the NATO standard for referencing locations on the earth and it is often used by Emergency Response teams across the world.  USNG, which practically uses the same notation as MGRS, is widely used by Seach and Rescue and Emergency Response teams in the United States.  In fact, through  Directive 092-5, FEMA sets the United States National Grid (USNG) as its standard geographic reference system for land based operations and encourages the use of USNG among community partners

Unlike the different notations used to express coordinates through a latitude and longitude pair (DMS, DDM, DD...), USNG and MGRS provide a unequivocal and more user friendly way to denote a location.  The following table illustrates differences between a few common notations:

The fundamental issue with DMS, DDM and DD notations is that they are more difficult to read and people can transcribe the coordinates in slightly different ways which ultimate can lead to confusion. It may not be obvious to untrained field staff what the difference is between Decimal degrees and Degrees and decimal minutes. People may swap the order of the latitude and longitude values etc  In that sense, while MGRS and USNG may be just as cryptic at first to the untrained eye, they reduce the chances of getting the location wrong. It really does not matter where you put the spaces in USNG or MGRS, and there is no chance to flip latitudes and longitudes around... if you transcribe all the characters in order, you get the intended location right.

For the reasons above and more, organizations are choosing MGRS and USNG as a common location language  and want applications like Survey123 to work naturally with them.

Lets explore first how field users of the Survey123 field app can get the coordinates of a particular location. This is achieved through geopoint questions in the form, which support MGRS/USNG coordinate readouts in both the map preview and detailed modes. 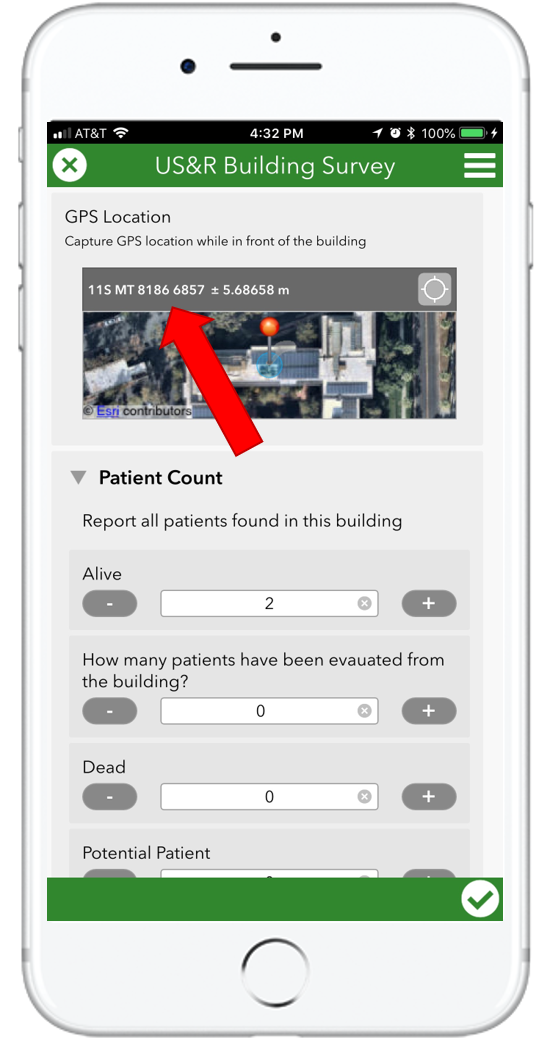 Geopoint questions in your form will always display the coordinates of the selected location as well as a map in preview mode.

In the survey shown on the side, for example, the current location of the device is shown in USNG notation, along with the estimated horizontal accuracy.

The coordinate format to be shown in the map preview is configurable by the author of the survey as follows:

The available coordinate formats are:

Reading and configuring map coordinates in the map detail mode

The map preview as described above is intended to give the field user quick access to visualize a selected location and its coordinates.  By tapping on the map preview, Survey123 will bring the map into full screen, or detailed mode, and switch into interactive mode.

When the Survey123 map is expanded to full screen, the map coordinate display is at the bottom. Note that the coordinates change as the map is panned around. For example, you can use the geosearch to find an address and immediately get the MGRS coordinates.  Or you can refresh your location using the device's GPS and get the coordinates again.

The coordinate format for the detailed map is also controlled from Survey123 Connect as described in the previous section.

A second workflow when using the Survey123 app is that where the field user needs to define the location of an event, asset or observation, by entering its coordinates.This is done through the geosearch input in the detailed map view (map at full screen) of a geopoint question.  The geosearch input automatically accepts map coordinates in a number of formats: DMS, DDM, USNG, MGRS. Simply type in or paste the map coordinates and the map location will be set.

Through the use of calculations, a survey author can configure a form to automatically persist geopoint questions in different map coordinate formats.  This is achieved through the XLSForm calculation column, which can take a geopoint object and extract its coordinates in USNG and MGRS for example.  This is what the syntax of the calculation will look like:

In the example above, the pulldata"@geopoint") function is used in the calculation column. Note that we first pass the question holding the geopoint object, which in our case is location,and then we indicate the property from the geopoint that we want to extract: USNG or MGRS.

The expression in the calculation column is evaluated every time the location changes. So for example, if the user is in map preview mode and hits the GPS button, then the location is recalculated and with it its coordinates in the usng and mgrs questions.  The location could also change when the user manually sets a new location through the map detailed view, either by passing an address, a coordinate pair or simply panning the map.

Note that in the example below I used a text type of question for the USNG coordinates.This means that the USNG coordinates will be displayed in the form to the end user. If you use a text type of question, you may want to flag the question as read-only, so users do not overwrite the coordinates.  In the case of MGRS, I choose hidden as the type, because I wanted to keep the calculation hidden from the end user of the survey, but still have this information be submitted as a GIS attribute to the ArcGIS feature layer.

When using the pulldata("@geopoint") function you can control the precision of the coordinates you will get back. In the example I provide above, no precision parameter is passed. When no precision is set, the default precision for MGRS is 1 meter, and for USNG is 10 meters.

For clarity, this is what USNG coordinates at different precisions will look like:

When working on WGS84 and NAD83, MGRS and USNG are the same, although the notation for USNG typically  includes spaces in between the Grid designator, 100K meter grid and Northing and Easting.

The pulldata("@geopoint") function supports many other properties as described in our Geopoints—Survey123 for ArcGIS | ArcGIS help topic.

More on MGRS and USNG in ArcGIS

There are a number of additional utilities within ArcGIS that will help you work with MGRS and USNG.