Applying symbology from a .lyr or .lyrx file has been an on-going battle for me.  I had an earlier post describing a problem with 1.4.  I was able to get past that, but now find a different problem at 2.0.

I am in the process of upgrading a couple of applications from 1.4 to 2.0  I have encountered a problem when I attempt to apply the symbology of a .lyr or .lyrx file to a layer brought into the session by the application.  This had been working in 1.4

I wanted to see how Pro itself handled this by running the GeoProcessing Tool "Apply Symbology From Layer" interactively through native Pro.  I manually brought in a non symbolized grid layer into Pro.  I ran the tool and entered the grid layer as the input layer.  For the Symbology layer, I navigated to a .lyrx file that is built from a different but identically structured grid.  As soon as I finished browsing to this file and selected it, the "ApplySymbology From Layer" tool 'seized up'.

Regarding the .lyrx file.  I am able to add it directly to a pro-session with no problems and proper symbolization.  If I do this, I am able to run the Apply Symboloby From Layer tool interactively, using the just added grid (from the .lyrx) file as the symbol layer and the tool works. It appears the version 2.0 tool only works with fully qualified layers that have been added to the session and not with providing it .lyr or .lyrx files that point to and are symbolized the same way.

I have a series of screen captures illustrating this experience with using the tool with a .lyrx file and then with a layer already added to Pro. 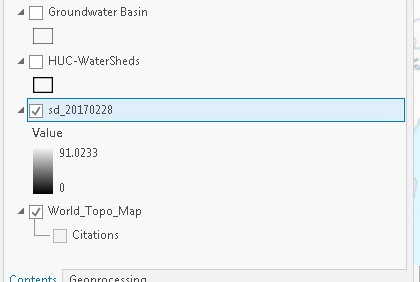 This image shows trying to run the tool using a .lyrx file as the symbology layer source.  This image also shows the output screen from Visual Studio that captures how it behaved after adding the .lyrx file to the Symbology Layer input:

It simply seizes up.

As a test to make sure the .lyrx file I was using was healthy, I added it to the Pro session through the Add Data button. This image shows it successfully added: 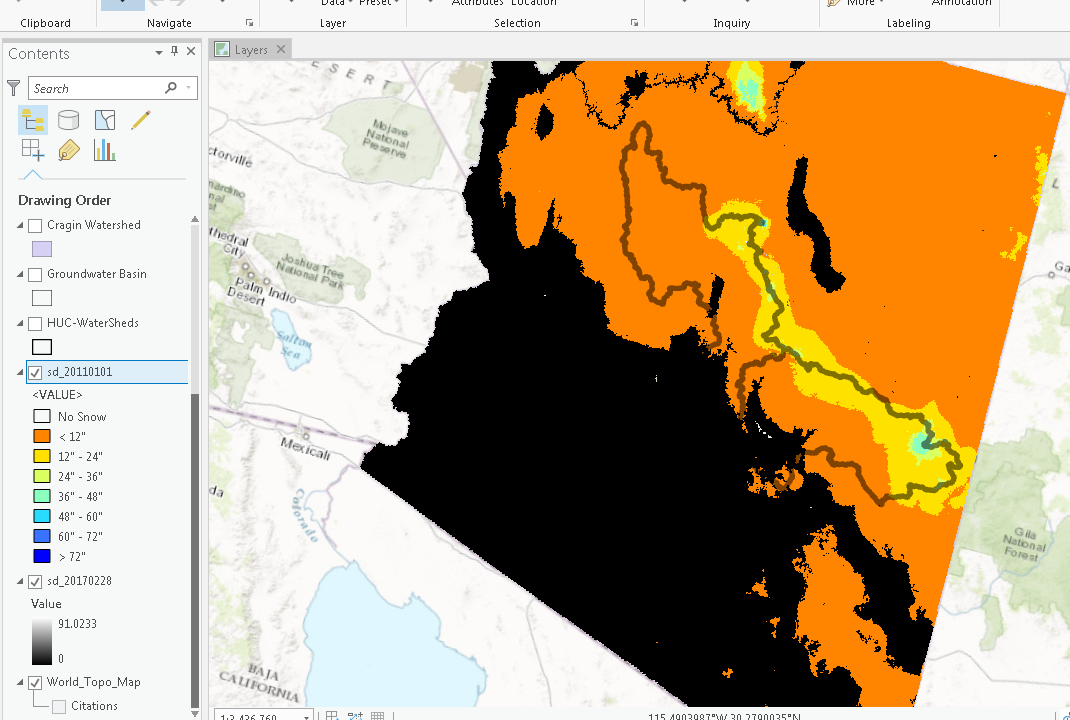 The following image shows running the Apply Symboloby From Layer tool using the just added GRID from the .lyrx file. When I populate the Symbology Layer input, the tool does not misbehave: 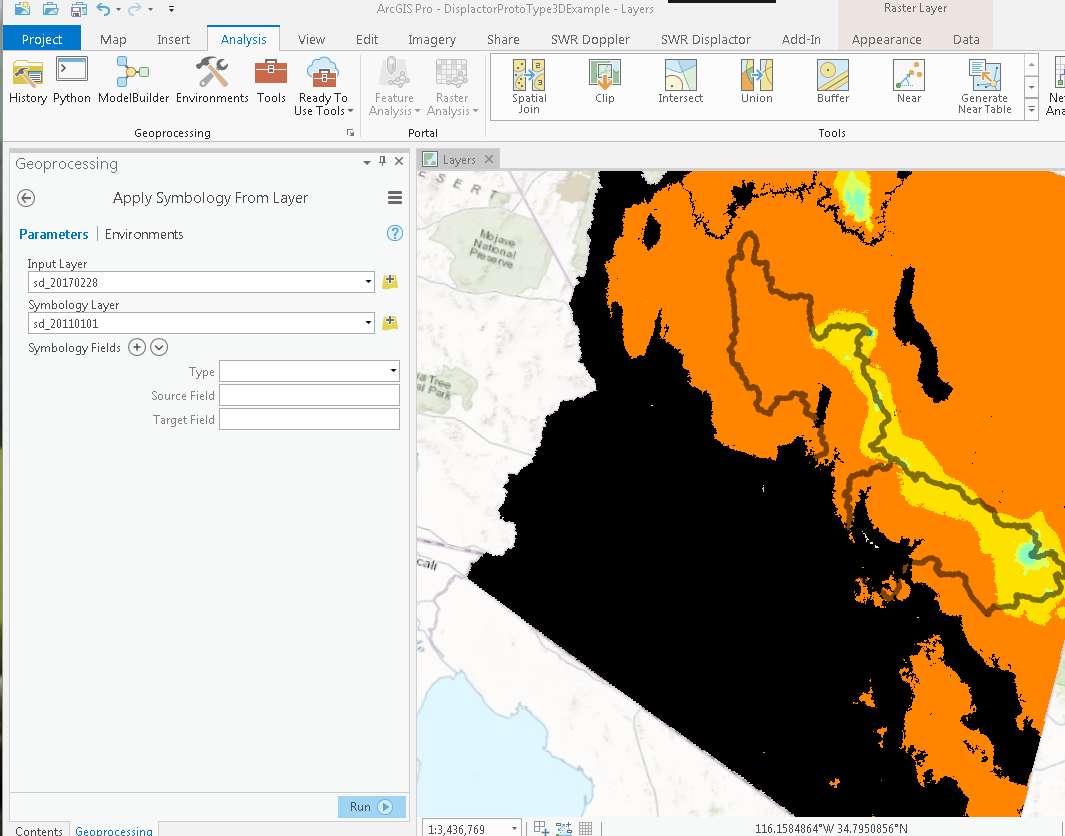 The final image shows the initial non-symbolized grid now with the proper symbology. 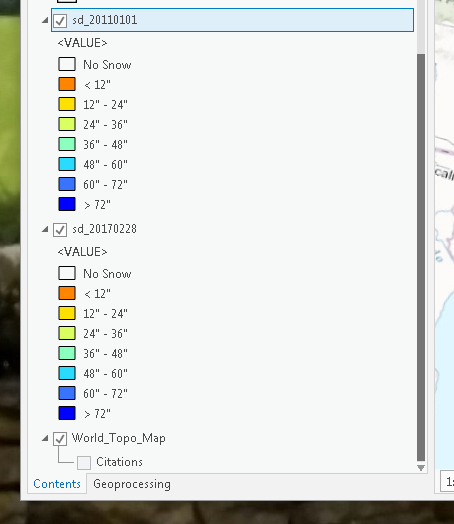 This seems to confirm that the tool is not properly handling .lyrx files when provided as a the symbology source.

Any assistance is appreciated.  I will be unable to reply to any responses for a few days.

There are many problems with the GeoProcessing Tool "Apply Symbology From Layer" especially from API. Some problems are related to display cache. I reported them to Esri support and they marked them as bugs. That tool in 1.4.1 worked better than in 2.0 (I mean from API). To check if problem related to cache make following workflow:

Thanks for your helpful reply.  I apologize for not responding sooner but have been away.  I have been working with your suggestion with some success.

I was successful implementing your workflow interactively in Pro. If I follow your suggested workflow, for my application I will need to programmatically go to the layer's properties and set the "Don't cache any data locally" property to achieve the desired effect.

It sounds like you have passed along a number of issues to ESRI, who have identified them as bugs.  Do you have any sense from ESRI that they will be resolved in the .1 or .2 releases?

Thanks again for your assistance.

I am not alone

Worst thing is that I have tried to make the same workflow from code but without success. That's why I reported bug, sent peace of code and etc. They agreed that it does not work.

I have reported many issues before 2.0 release (1.4.1  and 2.0 Beta) and thought that they will be fixed, because solution must be one line of code or something like that. But ...

One bug they closed with explanation that it was fixed in 2.0. I have checked and it is not.

Geonet is not the right place to report problems. I think the fastest way to have solution is to report the same bug from different users. Please contact your Esri distributer or your company GIS administrator and you will get access to create cases  for Esri software issues. This way is not very simple. You must document each case, workflow, data... This way is our chance to solve our problems.

Thanks so much for the information.  Presently, we are upgrading some servers to a new flavor of SQL and I have not been able to get back to this.  I'll let you know how I fare.  I appreciate your follow up.

For anyone still struggling with this in ArcGIS Pro, this worked for me.

I tried this code and it worked from the python window, but every time I run it from my script, it errors out saying the fields I used couldn't be found from the source or input layer.  Any ideas?

This did not work for me. So this bug with ApplySymbologyFromLayer is still not fixed in Pro v 2.2 sad to say.

I have tested ArcGIS Pro 2.2 beta and found that ApplySymbologyFromLayer still not works. My workaround does not work on ArcGIS Pro 2.2 too. So I registered Case number: 02133585. It is registered as bug. When it will be fixed I do not know. I think it depends how many developers have problems with it. So we need to increase importance of that functionality by registering your own cases.