I work with a project since pro 2,5.  Beginning at 2,7 I start to have Transformation Warning without changing anything.

Anyway, I doesn't understand how to fix this.  I saw that more transformation are available in my Esri but, no way to find them.  Help please. 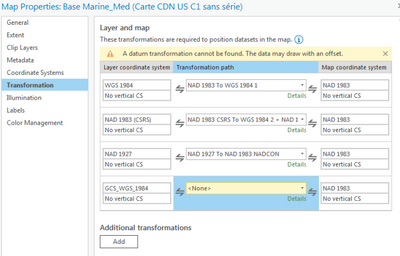 Can you share the projection info of this layer with GCS_WGS_84? I'm thinking esri just isn't recognising the datum as WGS 84 and possibly you just need to define it as WGS 1984 - although I cannot be sure of that and may be completely incorrect.

HI, I have hundred of layers from many sources, so any way to know, like for links, to show a list of projections. Passing each of these link one by one,,,

If you go to Map properties (rightClick on your Map in the table of contents) then ;Coordinate Systems' then layers should be listed under each coordinate system present in the map.

Esri recognizes most of the coordinate systems by EPSG.

Looks like the data (GCS_WGS_1984) has been created in a non-Esri software, which ArcGIS Pro doesn't identify.

As mentioned by David, check the list of layers under the anomalous coordinate system from Map Properties > Coordinate System > Layers. 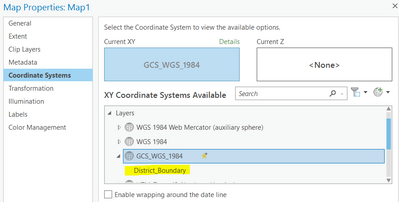 Using Define Projection, define the coordinate system of those layer(s) as

Although the names are similar, the one you just defined is identified by ArcGIS Pro correctly.

Here is how the coordinate system of the Layer looked before and after executing Define Projection. 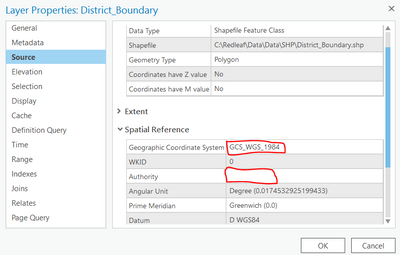 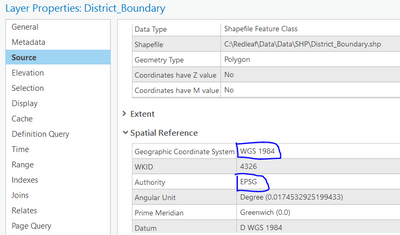 *Note: Sometimes the culprit layer(s) could have a projected coordinate system on top of its GCS. Here is one example that I have. 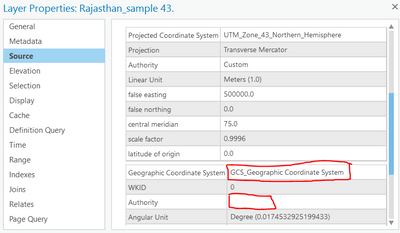 Thanks, It's what I had in mind. I also do these changes manually.  Unfortunately we can't or I haven't find the way, in option for all the time tell the system to make it the same. Like in your exemple. GCS WGS = WGS that's it.

One thing to examine is go to Project tab->Options-Map and Scene.  Expand the Spatial Reference dropdown and see if the "Warn if transformation between geographic coordinate system is required to align data sources correctly" is checked.  If so, then ArcGIS Pro will warn you every time (just like ArcMap does) that there is a geographic transformation issue.  If you uncheck this, ArcGIS Pro will resolve it for you. 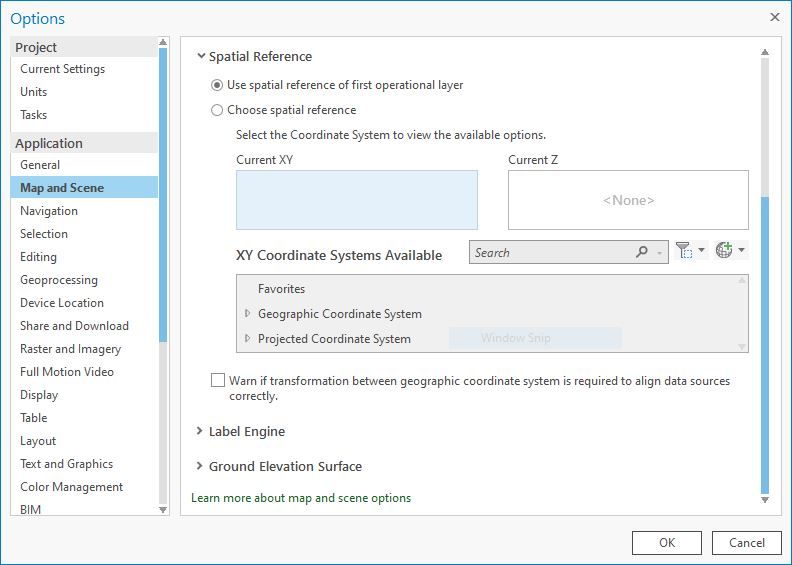 Thanks, unfortunately it was uncheck.  So I check it and unselect it to see if it will do the job.