I have specified the yellow as the first raster in the mosaic list, then specify First for the operation parameter of the function.

The output mosaic has produced the yellow raster as expected, however the green and blue rasters have been shifted slightly to the right.

How can I prevent the blue and green rasters from shifting?

2. A mosaic which has caused the blue and green raster to shift to the right. Only the yellow raster has maintained its position. 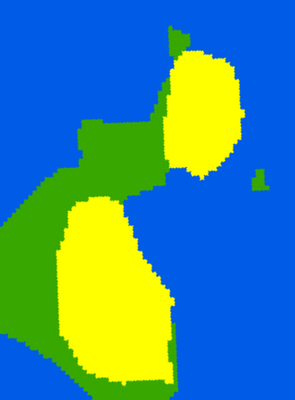 Note: the rasters were originally land class shapefiles which were converted to rasters with the same pixel size in order to remove small gaps/slivers between the boundaries of each shapefile.

I haven't really had this experience but need to ask, are all the rasters in the exact same coordinate system? If not, this could be the issue.

When the layers were converted to rasters, was the same resampling technique used (like nearest, bilinear, or cubic)? Also, in the Mosaic Colormap Mode, could you try using "Match" instead of the default "First" and see if that makes a difference?

Rasters have the same coordinate system. The shapefiles were indeed converted to rasters using the same resampling technique (nearest). I've just tried using "Match" instead of "First" for colormap mode and the same issue occurs. I have a feeling it may be the blue and green rasters shifting to "snap align" with the yellow raster thought that's a guess. If this is the reason, I wonder what I can do to stop the blue and green rasters from shifting to the right.