I have a simple model that appends feature classes in an SDE to feature classes in a project geodatabase. The appended feature classes are then exported to shapefiles in a folder created by the model. The model performs as expected when run from the editor pane as shown below. I would like the user to be able to run the model as a tool and provide a name to create the new folder to export to. I assumed this would be accomplished by making the 'Folder Name' a parameter. When run this way the tool successfully creates a new folder and bypasses the append and export tools. I have tried setting preconditions with no success.

TLDR; Model operates as expected until folder name is set as a parameter and the model is run as a tool. 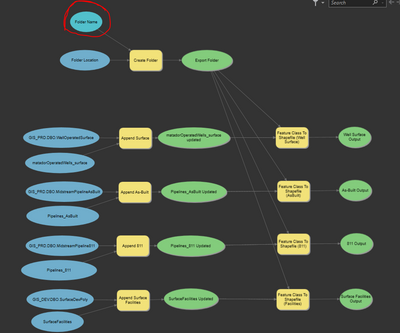