I've delineated watersheds in both ArcMap and ArcGIS Pro, using the same DEM. When I view these watersheds in Pro (right side of picture), the one created in ArcMap is shifted slightly. In ArcMap (left side of picture), they align perfectly with each other and the DEM. Both maps were new with the DEM pulled in first, so they're in the same projection. However, the ArcMap-created layer is in WGS 1984 (GCS) and the Pro-created layer is in UTM 15 (PCS). I've had this issue several times with layers being shifted between ArcMap and ArcGIS Pro. 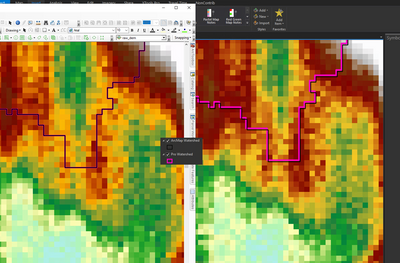 As far as I can tell, these are the same transformations: 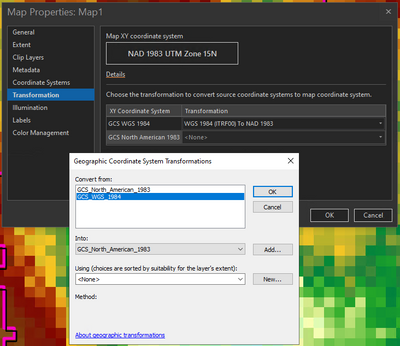 Gotcha! So I was reading the ArcMap box wrong (I thought the "Into" dropdown was the transformation it was making). So that actually fixes my problem, if I set Transformation to "None" in Pro. Thank you.