Hello! I am working with shark tagging data, and I am running a kernel density analysis in ArcGIS Pro to determine areas of highest density. My output visually looks correct, however the value outputs are confusing to me. I understand they are the pixel density, but I am wondering how I can translate to the population density of sharks in that area so I can use the numbers as well as the image in my analysis. For example when I run my kernel density in RStudio my output shows that 75% of the population is within a certain area. Any clarification would be very much appreciated!

You ruled out the help topic descriptions?  For example...

Hi! Thanks for the quick reply, I did look into this and I think the answer I am looking for is in this sentence specifically: "The density at each output raster cell is calculated by adding the values of all the kernel surfaces where they overlay the raster cell center.". I am just. not quite sure how to interpret that. I am new to GIS, and I am not quite sure what they mean by "kernel surfaces" and "raster cell center". Thanks again!

it might help if you had an image of your input points and the options that you specified in the KD tool.

In short, you have observations of something in space... a sample effectively.  What you are trying to do is represent the "density" of those points with respect to the other points and a distance for each cell.  Each cell in the resultant raster is needs a value which is calculated as follows:

Kernel density spreads the known quantity of the population for each point out from the point location. The resulting surfaces surrounding each point in kernel density are based on a quadratic formula with the highest value at the center of the surface (the point location) and tapering to zero at the search radius distance. For each output cell, the total number of the accumulated intersections of the individual spread surfaces is calculated.

In the end the result is a measure of the number of occurrences of something per unit area.  If you change the parameters, keeping the data set the same, you will conceivably get a different result

Thanks again for your continued help, I think it is starting to become more clear to me. I have attached a screenshot of my input values, where "Full_Mako" is my data set layer that has the lat and long coordinates included. The rest of the input values were automatically generated by GIS, and the option to change the unit area has disappeared? I do not populate the data to anything because each point represents one location, so it is weighted by one. I have also included the output values. Thanks again! 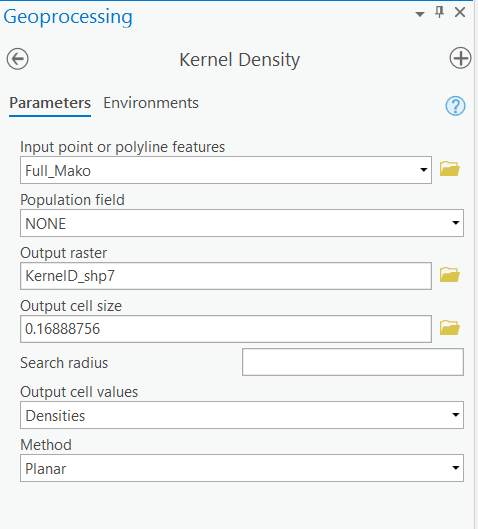 It is hard to make any other recommendations without the "end goal" being known, especially if this goes beyond a pretty map and you need to make inferences about the population patterns.  So, you can get a map, it will represent 'density per unit area' but the details still depend on the choices made.

If you have a license for

An overview of the Spatial Statistics toolbox—ArcGIS Pro | Documentation

An overview of the Geostatistical Analyst toolbox—Help | Documentation

if you are looking at a predictive surface.

So many decisions eh ?

Yes, my study area spans from about Canada to the Gulf of Mexico, so it is quite large. I didn't specify a study area because I have such a big study area and there are multiple areas of high density or clusters, I provided an image below, and I thought I read somewhere that in that situation it is better to use the default settings. But thank you for your advice! I'll try to look into ways for estimating cell size and search radius! Thanks again! 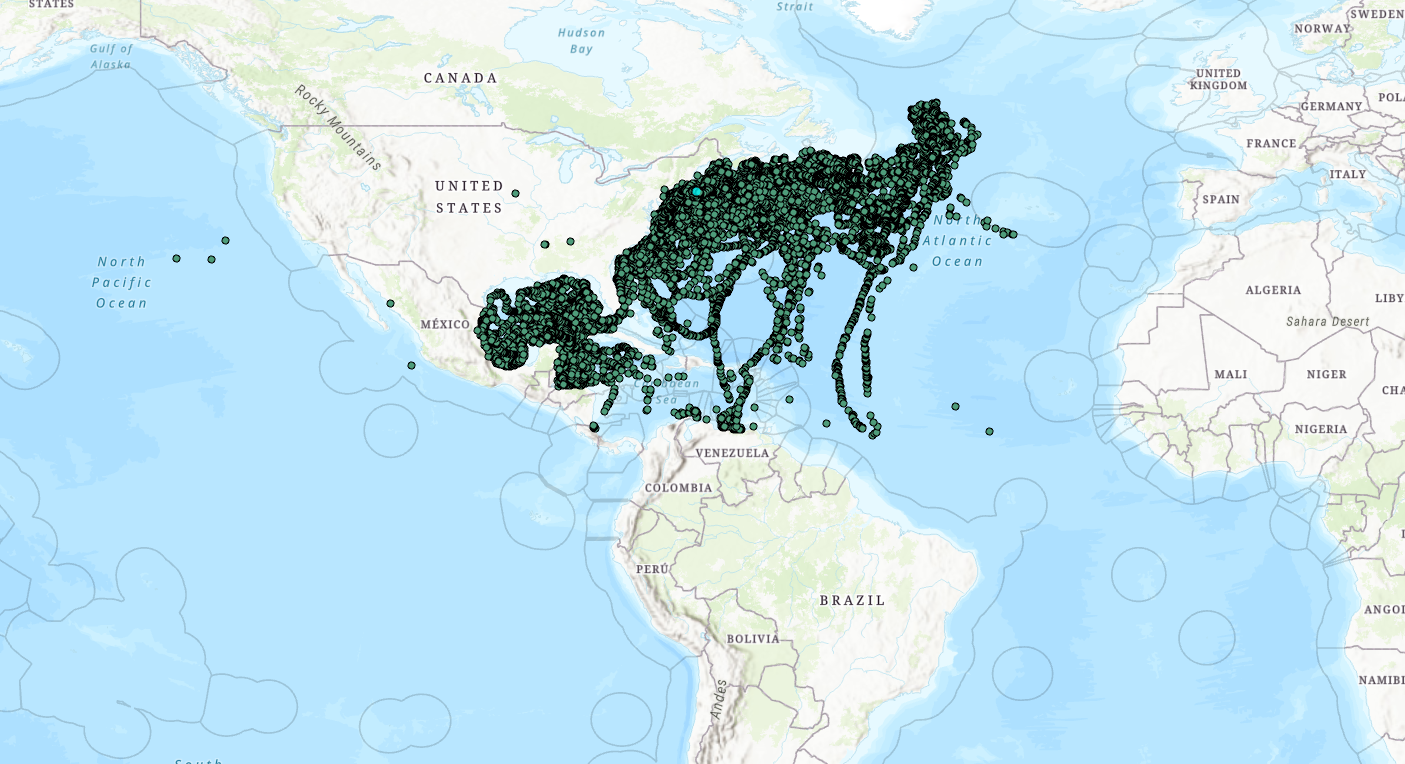 On a quick note... you might want to remove the mako shark sightings in the pacific ocean and particularly those on land!

These are going to have a big impact on the results you have obtained.  You will need to eliminate the landmass completely with nodata values.  These are skewing your results

I think I am finally getting closer to reasonable results, thank you so much for your help!

Maria Manz‌ post again, if you get acceptable results and show what parameters you used for the inputs.  It is important that you masked/removed the land from the analysis... you don't want to set off alarm bells about onshore shark sitings