Insert Related Report, Only One Relate per Layer Visible

I'm trying to build a report in Pro. I have:

For each cadastral layer, I have a relate in place. This is not a parcel fabric service layer, but rather a hosted generated from a parcel fabric, with a few modifications, namely that each feature's created/retired by record field is populated with the associated document name, among other things. 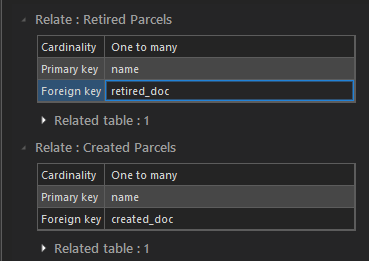 The report is based on the Records layer. I'm trying to add a related record for each relate, but on the Create New Related Report pane, I see this: 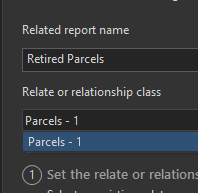 It seems whichever relate I create first is the one to show up on the list, and I cannot choose the other relate. I have considered having separate layers in my map for created/retired, or alternatively to create a bunch of separate reports that I could then merge, but seems like it would be unnecessary if this would just pick up the other relates.

Unfortunately, I did not have any relates in place at the initial publishing of the hosted layer, so the relates are just ad-hoc in the map. Any workarounds here?