How to remove duplicate values from Dynamic Text (Attribute Value)

I'm trying to use as much dynamic text as I could for our maps. I wanted to get rid of duplicate Township labels and just show 1 value. 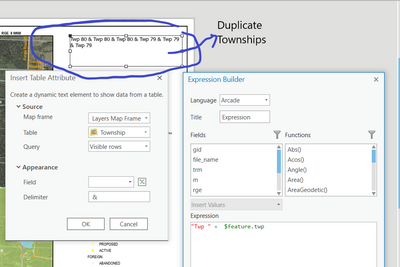 If you were only wanting to show 1 value (i.e. 80 but not 79 in your image above), then I'd say yes. I too struggled with this for a while. The solution I found was to add a section of spaces (i.e. "            ") to the delimiter field. This essentially added a big gap between the first and second value, resulting in the second value not fitting in the frame. The trick was putting in enough spaces to bump out the next value based on the shortest value you wanted to display (i.e. "Word" instead of "Reallylongword"). If you had enough spaces to fill the gap between two lots of "Reallylongword", but not enough to fill the gap between two "Word" values, you could still end up seeing "Word           Word". The other neat little part of this was that the text justification was based on the values displayed (i.e. it would still centre the "Word" and not factor in the delimeter). See below for clarity. 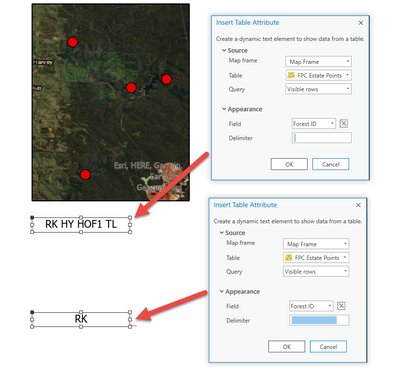 Unfortunately, I don't think this will work for you, as it looks like you have multiple features with the same value (i.e. 80) and therefore, you wouldn't be able to get it to discriminate between values. Arcade doesn't seem to have a solution either (no "remove duplicates" text function which would be really nice to see). I tried using the DISTINCT function but that didn't work either. It returns an array, which doesn't translate into a string, and when I tried to convert the array to a string, it just gave me what we started with. 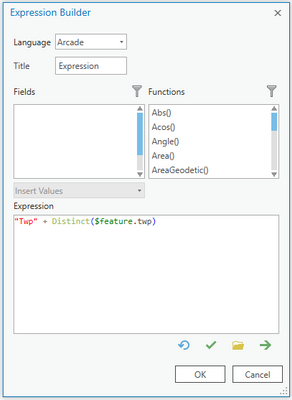 You should be able to get what you want by changing your query. Instead of visible rows, try using Custom Query to build a query for just the feature you want to show. 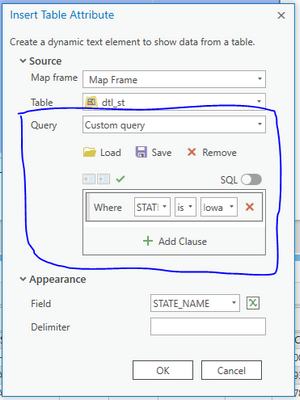 Or, if you are using a map series the Map Series Row option will only the value from the map series index layer, not all the other values. 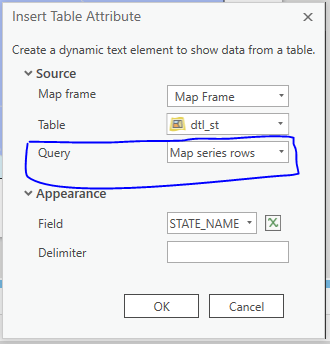 Hi @AubriKinghorn. How would yo create a filter query that shows unique values only? I've tried and looked and failed to find anything that would do this. I looked at the DISTINCT function but it didn't seem to be available.

Thank you Lindsay Raabe, unfortunately I tried the distinct function and it doesn't seem to work too.

Hi Aubri, thank you for the response unfortunately I am not using map series and this map I'm working on is a general template so users won't have to edit the Map title hence I can't lock it with a query. ☹️

I have had similar situation in the past and the only way I was able to achieve was to write a custom printing tool that was published to ArcGIS Enterprise to use and I modified the python script, which provides more finer control. I used a lot of dynamic text elements and changed the values for each of them based on the requirement.

I actually posted an idea after looking at this issue here: https://community.esri.com/t5/arcgis-pro-ideas/arcade-function-to-show-unique-values-remove-duplicat... and got a reply from an ESRI contributor saying that you could use the DISTINCT function to do this - though I fail to see how. My attempt to make it work failed (as shown in the replies).

If the DISTINCT function is not working with the Value dynamic text element I would consider this a bug. Can someone log this with Support? It will help us prioritize this.

@TomBole thanks for that. I'll get onto it and link it back here.