How can Update a feature class automatically with a collector layer

I don't want to create a view and also I cannot use relationship class as two feature classes are in different geodatabases.

Hello, here is one option:

Create a model in ArcGIS Pro that Appends the two data layers to the one layer where you want all the records to live. The inputs can be from different geodatabases. After you create the model, you can schedule it to run every night or however often you need to. I attached a screenshot of how you could set it up. 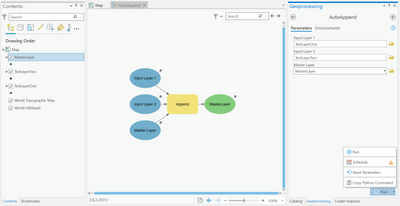