I'm running into an issue where I'm unable to calculate the acres of my polygons in a host feature layer in ArcPro. The tool either just fails or returns an error message like the one in the image. However, it will allow me to do the acreage calculation in AGOL using Calculate Field function. This is problematic for me and other users of the layer. The workaround works but I should be able to update my web maps features and attributes without having to have ArcPro and AGOL open at the same time to make an acreage calculation. Other users have become so frustrated with it that they refuse to use it.

Has anyone else come across this issue? Need a solution,ASAP. 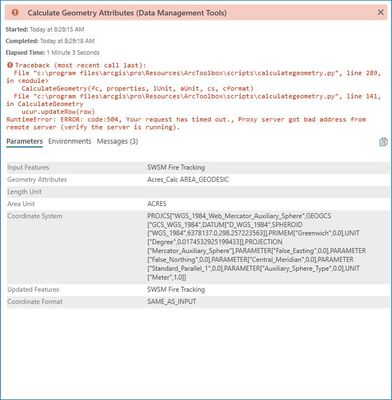 I was able to finally get the Calculate Geometry and Calculate field function to work, but I had to do it through the Table tab, rather than selecting it from the drop-down menu in the attribute table. This may be a bug. Prior to feature layers, I hadn't encounter this sort of issue