I have an aprx that I use often and it has a feature template: it's the ESRI Address data management solution so the template/symbology for site address points looks like this: 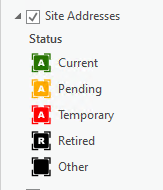 The data is housed in an Enterprise Geodatabase (aka SDE). I was working in a project file that initially was set up with the symbology shown above and I modified it for a map I needed to make.  I thought I closed the project with out saving any changes.

However, now when I add that feature class to a new aprx, or even a map pane in an existing one the are symbolized with what I had used in that one project: 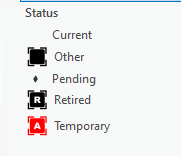 I don't understand where this is coming from. Prior to this little mishap, I could add the point feature classs to a new project and a default, single symbol would be automagically used.  How do I get that to be the case once again?

Oh... Yes, I've tried shutting down Pro and have even shutdown the computer it's running on.  I've also gone into Options / Display and Cleared the Local  Cache.

That should just about do it....
Reply
0 Kudos
8 Replies

Any chance the symbols were in a .stylx file somewhere? I'd check your Favorites or maybe the project folder.

I searched the computer c drive for *.stylx and found nothing: I searched the directory where all the project files are stored, and didn't find an *.stylx there either. Nothing in favorites.

But check this out: I just opened a new project (without any aprx template) and added the points.  Now they are behaving correctly.  I also opened an existing project, added a map and then the feature class. It works as expected as well.

Esri seem to have made some serious changes to its symbology in version 2.7. I have witnessed what you describe several times now and Pro seems to embed the last used symbology as the default symbology with each feature class or shapefile.  So when you add a layer to a new project, the last use symbology is automatically applied by default.

I noticed that the .shp.xml file now includes this default symbology, and if you delete it, then the shapefile will load without the last used symbology.  I usually find the new behaviour to be favovourible in most instances yet there has been the odd occasion where it was undesirable.

It would be nice if this was one of the Options that a user can choose to activate or not.

@MervynLotter - where do you find the .shp.xml? And what is the equivalent for an Enterprise GBD feature class?

The .shp.xml file is found with all shapefiles that Ersi software works with.  See image.

Unfortunately I do not know where the equivalent is stored in a geodatabase.  Hopefully someone from Esri can advise.

I was hoping one may be able remove the default symbology from Catalog but that does not appear to be the case.