I'm wondering if I may have found a memory leak with ArcGIS Pro 2.1.2.

Yesterday, after working with a project in Pro all day long, Windows alerted me that I was low on disk space. I opened Resource Monitor and noticed that Pro was using over 20 GB of Commit memory, but only about 6 GB of Working Set memory. This was the second time this had happened to me. The huge virtual memory usage was causing my pagefile.sys to grow, eating into the last 30 GB or so of my SSD.

When I first loaded the project in Pro this morning, it used around 1 or 2 GB of memory (confirmed both in Windows' Resource Monitor and the ArcGIS Pro Diagnostic Monitor). When I left for lunch, it was at 6.6 GB, and when I got back an hour later it was at 8.2 GB after leaving it open with the screen locked. Some bloat, but no big deal. Sometime in the next two hours, while working on the layout of my project, it again ballooned to over 20 GB (again, both in Resource Monitor and Diagnostic Monitor) but with Resource Monitor only showing ~6 GB Working Set memory.

The data mostly live in file GDBs on network drives (in a Novell environment); these sometimes cause headaches that are solved by working on a local copy, but I've never had memory problems like this. The simpler data sets live in an SDE.

I have been suspecting the odd memory leak myself. I have seen Pro slowly eating away on RAM, and then becoming unresponsive at some point after maybe 4GB RAM usage. Unfortunately, this is so ephemeral, I haven't got a clue how to reproduce this consistently.

Jacob, have you opened a case with technical support yet?  I think that will be the best way to approach troubleshooting this issue.  Thanks!

I haven't yet; I need to get my account connected to my organization this morning and then I'll open a case.

I'll try and post back here if we find anything.

After working with tech support, we've got a working theory about what's going on here. It appears that ArcGIS Pro really doesn't like our Novell network shares (ArcGIS Pro Export to PDF: PDF Won't Open in Acrobat ).

Based on the evidence that Pro doesn't seem to be properly closing file connections when writing PDFs to Novell shares, my theory is that there is a bug/error/incompatibility with writing any data to Novell file shares.

The .aprx file for my project is stored on a Novell file share, and it uses several feature classes from a file GDB stored on the same network directory. Perhaps when I open the project there is a file connection somewhere that isn't properly released and starts chewing up memory.

I'll do more testing when I get the time to try to narrow down the issue, but for now I'm going to assume that anything ArcGIS Pro-related that is stored or referenced on our Novell network is unstable.

In my limited testing of the PDF issue, Windows Server-based network shares seem to work as expected.

I have a similar issue with 3D. ArcGIS Pro will just keep consuming RAM during operations and not seemingly release it. Example being a video I am rendering. It will at first run and consume 8Gb of RAM, but complete fine. Then if I render the exact same video again it will consume the remaining RAM in my PC until the computer freezes up.

This seems to happen regardless of layers used too. I find if I close ArcGIS Pro and then open it back up it all works again. I would assume the layers used are fully cached already as they have been in use now for over a month.

Speaking of memory leaks, this is just from running "Select by Attributes". Restarted Pro several times, same task, same results (unresponsive workstation).  I was trying to convince a co-worker that Pro is the future, and he should start using it for new work...... 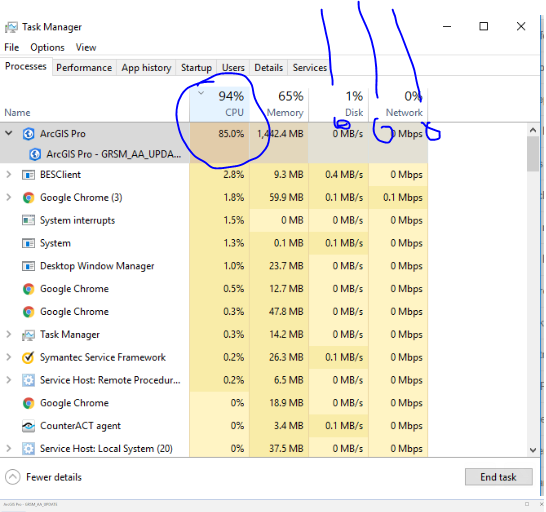 ArcGIS Pro is anything but not future… It is already ArcGIS Pro many versions, but still lord of bugs…

I am trying to export a map of all of the GNIS points in Nevada. I did this on my home PC without issue. It was such an inconsequential task that the downloaded the dataset for the entire country. Home system uses the new AMD stuff, but nothing outrageous. This workstation has an 8 core processor, NVIDIA Quadro 1000 4GB, 32GB RAM.

And it is not happy with exporting the map

Since this screen shot, a few minutes ago, memory use above 8200 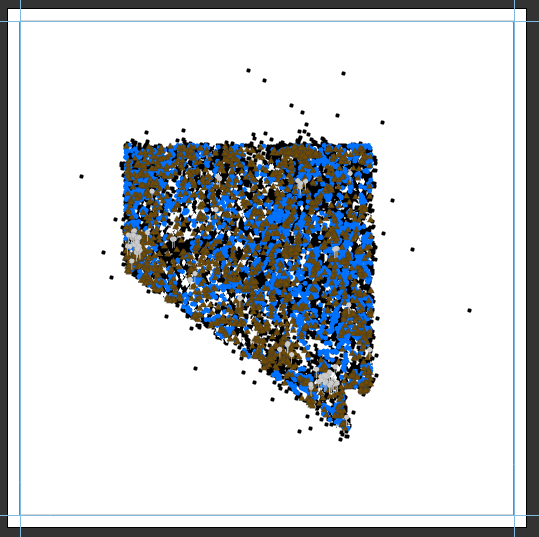