To be more specific I have many traffic assets that all relate back to a Cabinet, so every time a feature that is related to the Cabinet (ie. signal head, handhole, signal pole ect.) I want to append the Cabinet_ID and other field values.

the goal is for this to perform edit users who are collecting field points or users that are digitizing over aerials.

My initial trail with attempting to mimic the filed mapping with ARCADE and Attribute Rules is described below.

I am trying to work with a different script that generates by intersect the source field value to the target field; it is also part of an Attribute Rule

tinkering around with the ARCADE Sandbox, the script currently looks like this

My first thought was that you could create an attribute rule that would fire on creation of a feature to automatically inherit the attribute (and relate) the new feature to the traffic cabinet.  If you needed something more robust you could always create one or more batch calculate (or validation) rules that could populate or ensure these values are consistent.

Researching I have come across some examples where I can create a rule that automatically inherits the attributes, but when I look through arcade and attribute rules I am having trouble figuring out relating / utilizing relationship classes, besides Add Rule To Relationship class. Is there a function for relationships or would a more technical script need to be made using ARCADE?

There is an arcade function that lets you get all of the features related to the current feature ( Data Functions | ArcGIS for Developers  ).  Is this what you're looking for?

If you are using the Configure field mapping—ArcGIS Pro | Documentation tool you have access to the "$sourcefeature" and "$targetfeature". I don't think these are available when creating an attribute rule though.

I have looked into that method and would work great for post collection and editing, but I am looking for something that can be utilized in the field or during collection. I do have use for field mapping in another project though, it would be really cool to see if the "$sourcefeature" and "$targetfeature" globals could be used with attribute rules.

Yes that is what I am looking for. I used the following script to test:

this rule and the others I am using work great for generating unique_IDs  / inheriting values from related features. The next question I have is about updating these fields. I know that attribute rules gives you the option to fire on Update and that with ArcGIS Pro 2.5 the $originalFeature global has been added to clean up the unwanted occurrences that are triggered when editing / attribute rules fire on Update. 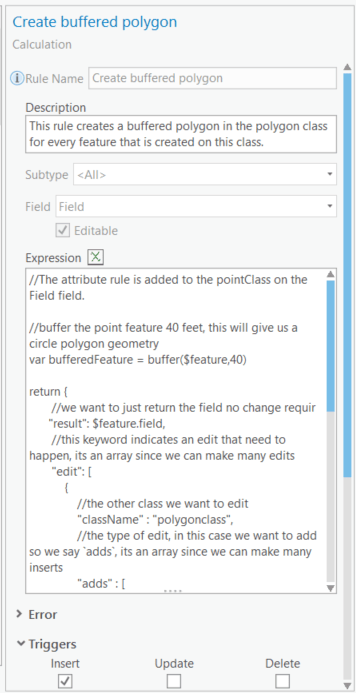 Note: The `result` key is used to return the value to persist in the field `Field` which the attribute rule is assigned to. In this case I really didn't do anything to the feature being created so I just returned the same value of the field `Field` (I know, terrible name for a field sorry). When returning the same value, the system will detect that there is no change and will not perform an additional edit to the feature. This is useful to avoid triggering behavior associated with the field (if any) such as extension specific behavior, e.g. dirty area management in utility network.

Update existing features in another class 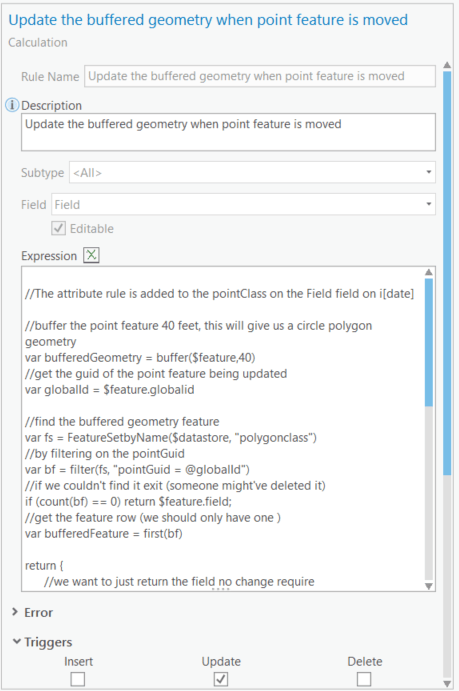 Though the FeatureSetByRelationshipName function works, it returns the field name and not the values that is populated from the nextsequence value function that populates the asset_id value of the feature from which the record is being fetched.

I now see where using the dictionary keywords would come into play, if the FeatureSetByRelationshipName cannot return field values, just field names.

I now see where using the dictionary keywords would come into play, if the FeatureSetByRelationshipName cannot return field values, just field names.

In that snippet you could have scratched the first line and obtained the same since you are not doing anything with the featureset you return by FeatureSetByRelationshipName.

Have a look at this expression:

... it retrieves the First record and from that record queries the field "MACOG_ID". This will return the field value (if it finds a related records and that field exists).

When I test the expression you provided and was provided with the error message that the "Type" does not support the function "first". After researching some resources, I now know that when using the "first" function the type must be either "Array" or "FeatureSet" 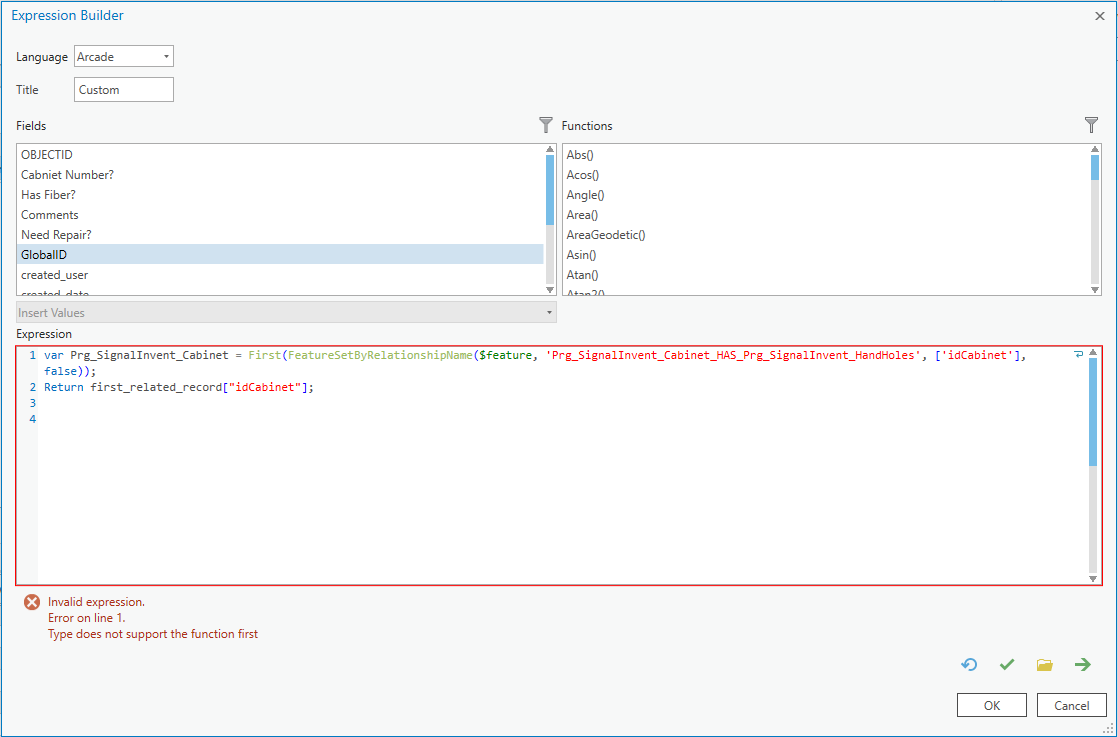 Attempted to use dictionary keywords with this script, the expression is valid, but returns nothing, but when I attempt to creat a new feature and evaluation error is given. I guess I am confused on how if I have a relationship class where Hand Holes are related to Cabinets, and the inheriting of the idCabinet value to the Hand Hole feature class is dependent upon there being a relationship between the features that occurs on creation of a handhole. To my knowledge I have to manually select the features to be added to the relationship to populate the idCabinet_GUID field. Hopefully this makes some kind of sense?

Also came across post on GeoNet where the user is trying to do a similar task of fetching a field value from a table and appending it to a target feature, I input some of my features. to test, but am given an error at line 27 for an expected identifier. How do you reference another field from a related table in Arcade?

The error message is indicating the there is something wrong with the expression and the FeatureSetByRelationshipName is not returning a FeatureSet as it is supposed to do (perhaps a mistake in the spelling of the name). First can be applied to arrays and FeatureSets so that is not the problem.

You could try and test this and see what it returns: