Is it possible to add an index sheet to an ArcGIS Pro map series so, when I export to pdf, the first page contains an overview map/index, followed by the individual maps from the series?  I created a spatial series based on NY counties, nice an easy.  For the life of me I cannot tell how I can now add an index sheet at the front of the pdf.  I must be missing something, maybe when I create the spatial series or when I go to export to pdf?  Thanks! 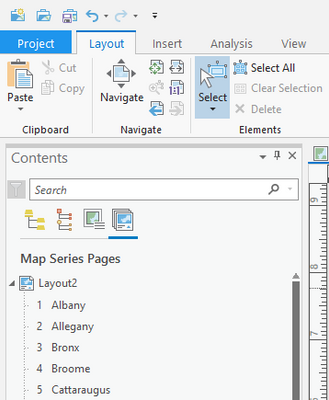 If you find an easy way let me know.  Currently, I create the map series in one layout and make a second layout for the index.  I print or export both to PDF and then I assemble the PDF using Bluebeam software.  You could also assemble it in other PDF software like Adobe Professional etc. but I use Bluebeam.  There are probably free PDF tools that can assemble the pages as well.

Something like that isn't possible with a simple Map Series. A Map Series creates one page per feature / bookmark, that's it. You could make a separate layout of the index and append the PDF to the front easily enough, but it would have to be a separate process.

The Esri folks who work with Layouts have mentioned elsewhere the development of something called a Map Book, which would include pages that are different from the main series. I don't know the ETA on that, but it's something to look forward to. For now, manual is the way to go.

I'm actually creating such a map series right now if you want me to walk you through my process in MS Teams.  Contact me through my website www.bigpineconsultants.com