With a standard install, when a user has both ArcGIS Desktop and ArcGISPro on their computer, there is no way to associate a .py file with the correct python interpreter because it could be either a python2 or a python3 script.

The Python 3 distribution that comes with ArcGISPro does not include this py.exe executable, and additionally does not register PythonCore into HKEY_CURRENT_USER or HKEY_LOCAL_MACHINE in a manner that would allow a downloaded py.exe to locate the Python 3 interpreter.

If one or both of these items were implemented, it would make it easier for users to work with both Python 2 and Python 3 scripts on our machines:

- distribute py.exe with ArcGISPro and configure it so it can call either Python2 or Python3

- populate the HKEY_LOCAL_MACHINE\SOFTWARE\Python\PythonCore correctly so that a downloaded py.exe will work without additional configuration

The py.exe model works well for environments where there are two distinct Python installations on the machine (one Python 2 and one Python 3), and was an important step in the phased transition between the two versions of Python. In the case of our products, it doesn't sufficiently address the issues of binding to Python across multiple products:

That precludes us from using the py.exe approach as it stands, but we do want to ensure that all versions of Python can be correctly addressed. For Python 3, the active environment can be addressed by calling the propy.bat script for the particular product. With the next release of the 10.x products, we have also ensured there is a clear mapping for each offering to edit and run each separately: 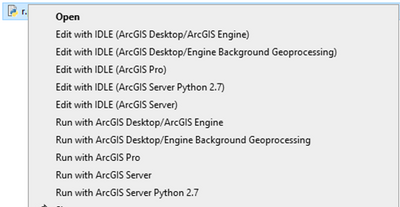 These values can also be found in the registry, and added to custom handlers to launch an appropriate environment for execution. I know that isn't specifically what you had asked, but hopefully that helps you move forward and feel free to follow up in this idea.