Drag & drop layer to new map: TOC does not update

When I drag & drop a layer from one map to another, the TOC does not update to the new map but remains stuck on the original one. This means I can't insert the layer directly where I want it, but have to dump it in the new map and then go move it to its correct place.

It would be much more convenient to simply drag it into the new TOC to its correct place and be done with it.

Yes. Drives me batty every time. What's worse is if you drag over the destination map and decide you don't want it there (move it back to the TOC), it keeps that map active while showing the TOC for the source map. 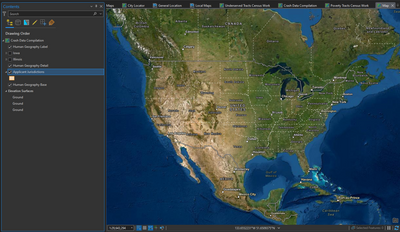 It also makes it impossible to drag a layer to a map in layout view since when you do that, you can't drop a layer onto the layout, it has to go into the TOC. The TOC never activates, though, so you can't do it. You have to let go of whatever it is that you have held by your cursor and go back to the source to either copy and paste or make both the source & destination visible -- but this route isn't possible when moving a layer within the same project since, again, the TOC is independent from the view whose contents it summarizes. If the TOC became less of a pane and more of a fundamental module within each view, that would solve a ton of unresolved problems related to not only this, but catalog browsing and floating sub-windows.