Thank you for submitting this @ChristopherJacobs2

Maybe I'm missing something here, but doesn't the tool already work only on a selected set of features if you have a selection in place?

Hi Kory.  If that is the case, then great!  That fact is not stated anywhere in the documentation of the tool, as far as I can see (am I just missing it?).

It should be added there for clarification.

It's well know that geoprocessing tools honour selections and it is even stated here under the parameters section. So it does not need to be replicated across all tools within the help file.  That said it's such an important facet of a geoprocessing tool that I do agree that this statement on this page should be given a more of visual presence rather than the almost casual tag on the end statement. I recommend this statement be put on its own line and put in bold for emphasise to bring it to peoples attention who are new to GIS.

I'm marking this idea as Already Offered since the tool honors a selection like nearly all other geoprocessing tools.  In terms of documentation, the current method is to document the exceptions to this rule.  Here is an example: https://pro.arcgis.com/en/pro-app/latest/tool-reference/data-management/truncatetable.htm 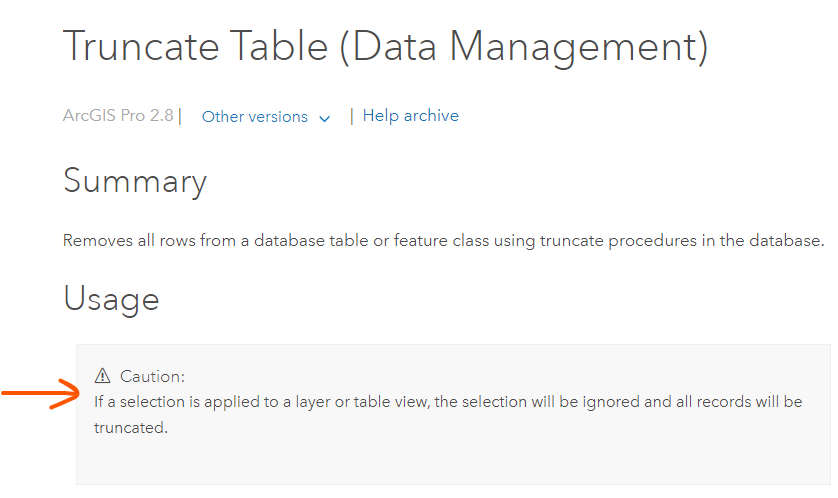 I will put this in front of the geoprocessing team, though, to see if there are ways we can more clearly communicate when tools are or are not acting on a selected set of features.

After further discussion on our side, there is an issue in the backlog to look at providing more messaging in tools about when they will be acting on a selection/full dataset, and potentially other filters.