I've pulled the Unacast web service into an AGOL web map for our coronavirus site. For part of the display in my pop-up, I have this custom Arcade expression to convert the values in the difference field to a positive number and then display the percentages with a max of two decimals:

However, the results in my pop-ups are inconsistent. In one spot, it looks great: 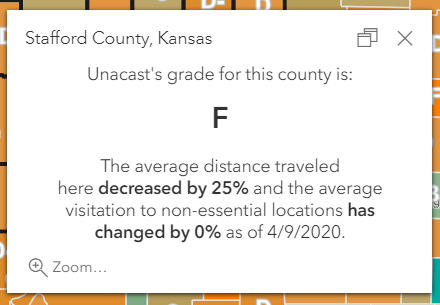 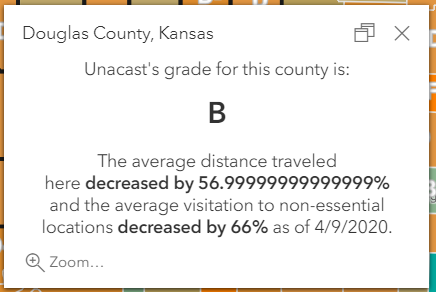 I've been ignoring it so far, but Douglas County is my county and that percentage looks ridiculous. Are there any tweaks I can make to the Arcade code to fix this?

I just made a very similar arcade expression and noticed the same behavior that you're describing.  I decided to try rearranging the expression to multiply it by 100 before rounding, so that it looks more like the following.

It seems to be giving me more consistent results now, though I don't have a lot of features to test it on.

I read the documentation for the Round function, and it has a note that says to use the Text function to format numbers for display in labels and pop-ups.  After looking at the documentation, I altered my expression to include the text function instead, and it even multiplies by 100 for me.

If you don't want decimals for your percentage, you will probably want to use the following format: