I am trying to use the Arcade "date" function in an expression for a popup to return the day, month, year but without the time. Well actually would like to lose the day of the week too. The documentation I refer to the time as an "optional" field:

So our archived time data is all mucked up and for our purposes we only really need month, day, year anyway. Is there something I can add to this Arcade Date function so that it returns the date but without the "20:00:00 GMT-0400 (Eastern Daylight Time)", and ideally without the day of the week "Thu" portion as well??

You could use something like this (assuming that the input date is a string and you want to return a string):

Thanks for your response, starting to see the light lol. I should have clarified the input date is actually not a string, but rather a date type, and I want to return a string like your snippet. Is there a slight modification you can recommend or it a whole other approach?

Thanks Ken, I had not thought of that...but just tried that and worked in my IIf function, and it worked as desired so good to go!

I think I am getting a little confused about Arcade for labeling and Arcade for expressions in pop-ups.

Would it be correct to say that certain Arcade functions work for popups but don't work in labeling, and vice versa?

There are different profiles that define what is possible in Arcade (symbology, labels, pop-up, field calculations, different types of attribute rules and so on). If you go to the playground you can select a profile (where you want to use Arcade) and see what is possible:  ArcGIS Arcade | ArcGIS for Developers

These are the different profiles you will see: 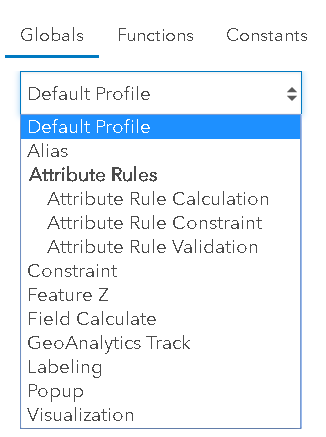 Don't forget to click Mark Correct on the reply that best answered your question.

Thanks Ken, that is exactly what I needed!

Thank you! Sometimes the answer is not a long read through Arcade date documentation.