We have configured several feature image layers using Arcade in the pop-ups. The functionality works great when you are in the web map where you configure the pop-up. The problem shows up when brining the configured Feature Image Layer into a new web map. The pop-up configuration is wiped out and we lose the customization we had created.

We have tested a couple of different layers that have arcade built into them and are seeing the same results.

Here is an example of the pop-up when it is working correctly: 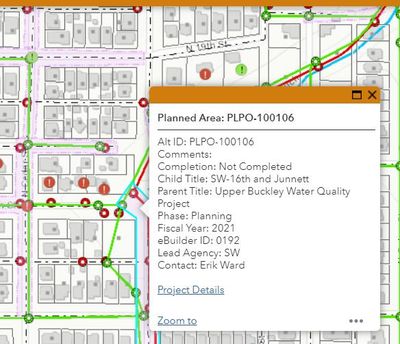 The same layer, when brought into a different map as a feature image layer: 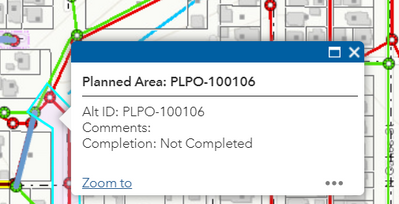 We depend on the functionality of configuring and saving the Feature Image Layer out for use in various apps and web maps, not just the one web map that we configure the layer in. Has anyone else seen this behavior/issue?

And you did the Arcade work prior to publishing it? I've sometimes found that things get lost that way. The best way to get your settings to "stick" is to make the adjustments in the item's Visualization tab.

I'm just a little confused by the term "Feature Image Layer". Is this a Feature layer or a Map Image layer? Is it a hosted layer, or published through a registered Server?

Feature Layer, published through registered server.  Configured the popups with Arcade, saved as a Layer, then tried to bring it into an existing web map as well as an existing web app (using the add data widget).

And you did the Arcade work prior to publishing it? I've sometimes found that things get lost that way. The best way to get your settings to "stick" is to make the adjustments in the item's Visualization tab.

Josh, I am sorry, I looked at this again (I am assisting a coworker on this issue) and it is a Map Imager layer that was created from a published through a registered Server. So I can't get to the Visualization tab. I am going to test this idea out, however and see if it makes any difference.

Do you have any insight for working with the map image layers? Wondering if this is how Esri is going to get us away from using these!?

I don't have any particular insights into Map Image layers. We try to avoid using them, just because re-configuring settings either has to be done per-map, or necessitates re-publishing the service. Is there a particular symbology or label setting that requires using an Image layer?

I think we figured it out! I can still publish as a Map Image Layer, then I can use the "Add Item" button on the content page. Using the Add Item, I can add the rest url (including the individual item #/ID) and create a Feature Image Layer. Once I have that created we can configure on the Visualization page as needed.

I was getting hung up between Feature Image and Feature Access. Once I sorted those out, your advice seems to be on the correct path.

We haven't had any issue with configuration and saving of configuration of the Map Image Layers with in the web map viewer (classic) until we added in Arcade to the configuration mix. We use the Map Image layers as a way to easily group data in our web maps. It saves us time because we can utilize the same set of data in multiple maps/apps.  This is something Esri is steering us away from with the new Map Viewer and the grouping capabilities in there.

Thanks for the input!