It took me awhile to figure this out, so maybe the idea here is for a more straightforward way to access it?

Select "Show Properties" from a layer's menu, then look over the right for the Properties pane. Click on "Information" in that pane to expand it, and then you will see a "more details" link that will take you to the layer's "Item Details" view.

@PeterKnoop - Thanks I think you solved the issue for me and also uncovered a bug! Love team work.

I followed your suggestion and the "Information" item was not displayed in my properties screen as seen in this screen shot: 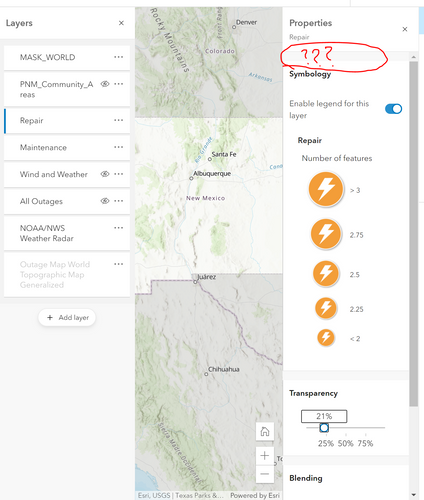 I then went to another layer that I had never tried before and followed the same routine. Guess what...boom...it was there as seen in this screen shot: 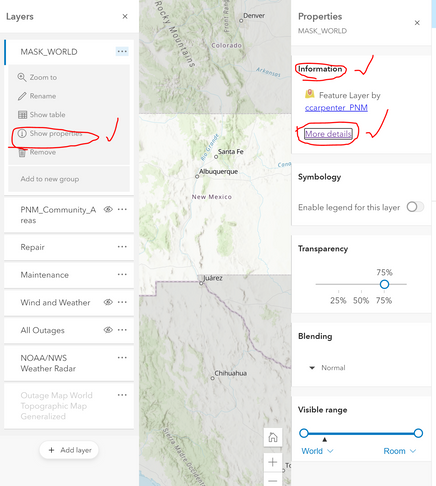 So yes the option to see the details is there and thanks for showing me what I could not see! Not obvious... I believe in my case though the reason I could not see it was due to an incompatibility between the new and the old. The layer that did NOT provide me the "Details" was originally placed in a standard webmap and then opened in Beta Viewer. The layer that DID provide me details was added while in the Beta Viewer.

Thanks again for the feedback!

@ccarpenter_pnm can confirm that I see the same unexpected behaviour with the Information section missing as well when mixing the regular and beta Map Viewer.

Currently we are only pulling in info from hosted items coming from the portal. We don't have plans to try to display service metadata if using a layer coming from URL but we could look at offering a link to the service to read that info with fewer clicks.

@RussellRoberts1 I think the questions I'm usually asking myself when I'm doing something like this are about jogging my faulty memory about which layer I actually added but now have forgetten, or checking to see if it a layer I've used is the one I think it is.

So seeing something under Information for all layers would be helpful. If a layer is coming from a non-hosted service, then seeing the URL there will likely help answer those kinds of questions, albeit the metadata would be a nice bonus addition!

@PeterKnoop  Precisely. When you are managing dozens of webmaps and even more applications its hard remembering all the details. If troubleshooting is required the first place I start is typically at the layer level and then I work up from there to the webmap and then the app and so on... If I cannot reliably verify a data source then that troubleshooting becomes difficult.