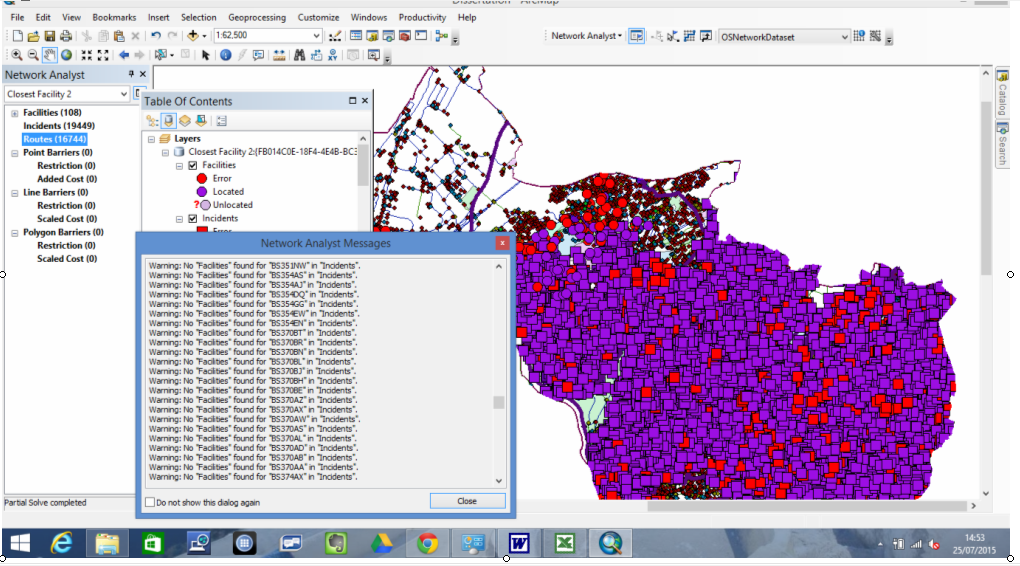 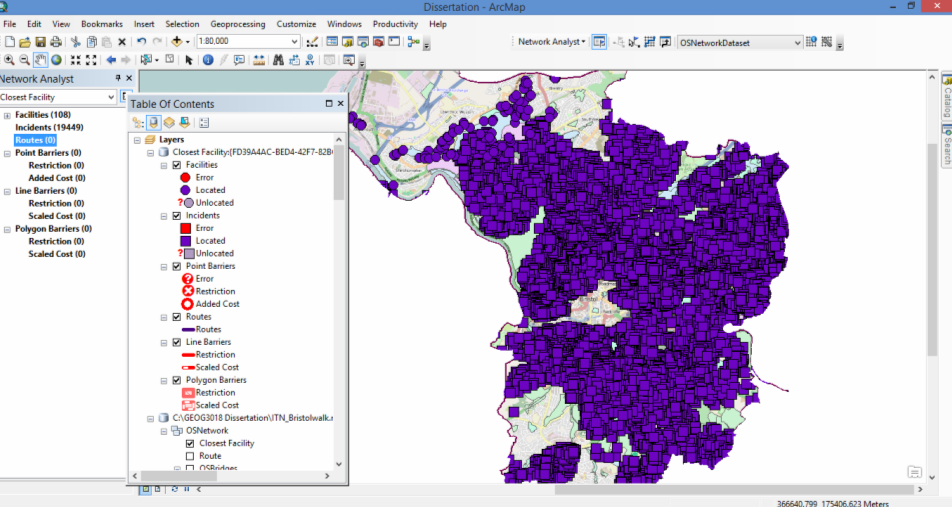 I'm very confused as to what the problem might be so any help would be hugely appreciated!

First, try using something other than time, since the 0 speed limit is definitely going to be a problem (alternately, you will have to edit that field to provide an appropriate speed limit)

Second, did you check to see whether the locations were indeed snapped to the network?  If they aren't, then you will have to increase the tolerance for a location being considered on the network.

Thank you, I'll try creating a restriction attribute for all the non-car-traversable networks so that they can then just be set as restrictions and excluded from the analysis. I'd set the tolerance to 50km which I'm pretty sure should have been high enough and I think that all the locations were snapped to the network fine as they were all originally located ok, so I don't think that this was the problem. Thank you for your help though

Some bits and pieces that may help:

The Tool help offers the following:

This restriction looks like it would be best for the non-vehicular portions:

Thank you, I've already had a look at these pages but I'll give them another look

Hi Charlotte J.  The previous answers have summarized the likely problem.  For some reason, your points are being located on network edges that are non-traversable.  Edges are non-traversable either because they are restricted because of a restriction, a barrier, or a negative impedance value (which the solver interprets as inaccessible).

Normally, the first thing I would suggest you do is to check on the "Exclude restricted portions of the network" button in the NA layer properties "Network locations" page before you load locations.  This way, if an edge is restricted, the point won't get located there but will instead get located on the next-closest non-restricted edge.  This works great for restrictions and for existing barriers.  I'm not sure how you've constructed your 0mph edges, so I'm not sure if Add Locations will be able to determine that these edges are restricted or if it doesn't become apparent until solve time.  At any rate, this is the first thing I would try.

To make your network a little more robust, I would create a restriction attribute that you can assign to all the non-car-traversable edges (like your bridlepaths) rather than using 0mph speed profiles.  That seems like a kind of odd way to do it when restriction attributes are specifically designed to do exactly this.

Thank you so much for you help. I've tried loading the locations after checking the "Exclude restricted portions of the network" button and it seems to be calculating routes for a lot more of my incidents now which is really good. Routes still aren't being created for 1073 of them though, an error message now showing up to list all those which no facilities have been found for e.g. "Warning: No facilities found for BS206GU in Incidents." So I'm still unsure why routes aren't being created for them all. I've checked that all my layers have the same projections as I've heard that this can prevent the analysis working properly, but they all do seem to be the same so this can't be the issue. But I don't think that the problem is that my incidents are on non traversable portions of the network anymore, as this message is no longer displayed in the error box.

And creating a restriction attribute for the non-car-traversable edges sounds like a good idea so I'll try doing this. When going through the OS Mastermap Integrated Transport Network Data Preparation wizard to prepare my raw ITN data, I left the speed profiles as they were, so in the "drive" profile speeds were already set by default to 0 kmph (sorry I made a mistake before in saying mph) for paths networks such as the bridleways and footpaths. I then assumed that by setting the impedance to "drive" in the analysis settings of the closest facility analysis layer that these are the speeds which would be set each type of road.

But if it's better to set networks which are non traversable as restrictions, as I'm also hoping to calculate walking speeds, should I then also set create restriction attributes for certain roads, since as these would be non traversable for pedestrians, I wouldn't want them to be included in this analysis.