I'm building a simple (or so I thought), network using two features; streets and bike paths, but I'm unable to get Network Analyst to use the connections where a bike path crosses a street.  The route result takes a major detour as shown In the attached image. The streets are gray; bike path is green.

Both the street and bike path features have populated from/to elevation and one way fields.  I have both features in one connectivity group set to Any Vertex (also tried End Point for both).

Any thoughts on what I'm missing? When doing the route analysis it works correctly when both the origin and destination are on streets, or both on a bike path, but not not when one is a bike path and the other on a street. 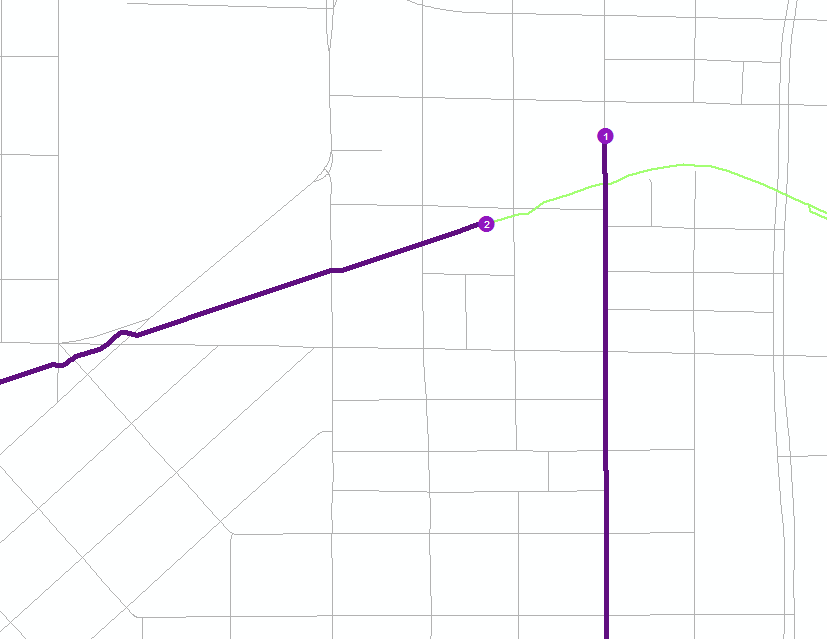 My solution was to merge the two features classes and split the lines at intersections before building them into the network and then use End Point Connectivity. Be sure to update any necessary fields after spitting the lines such as those with distance.

Are you sure that both the streets and the bike paths have vertices at the locations where they cross?  If not, they won't connect, even with Any Vertex connectivity.

You can add vertices at the points of intersection using the Integrate tool with a 0 xy tolerance.  Make a back-up copy of your data first, just in case, because the tool modifies the original data.

Thanks Melinda, integrating the two features is exactly what I need to do. For some reason I was thinking the vertex connectivity would also apply to edges that crossed over each other.

Just when I thought I had this network set up correctly I noticed a problem with connectivity within the bike path features themselves. After using the Intergrate tool, the connections between streets and bike paths works correctly, but it does not work where a bike path intersects another bike path even though there is a vertex at the intersection for both segments.

The attached images show where it works and where it does not work.  I have one group in the Connectivity Settings where both the Bike Paths and Streets are set to Any Vertex. The route traverses correctly when there are end points at the intersection, but not when it's an endpoint and vertex.

Any thoughts on what's going on here? 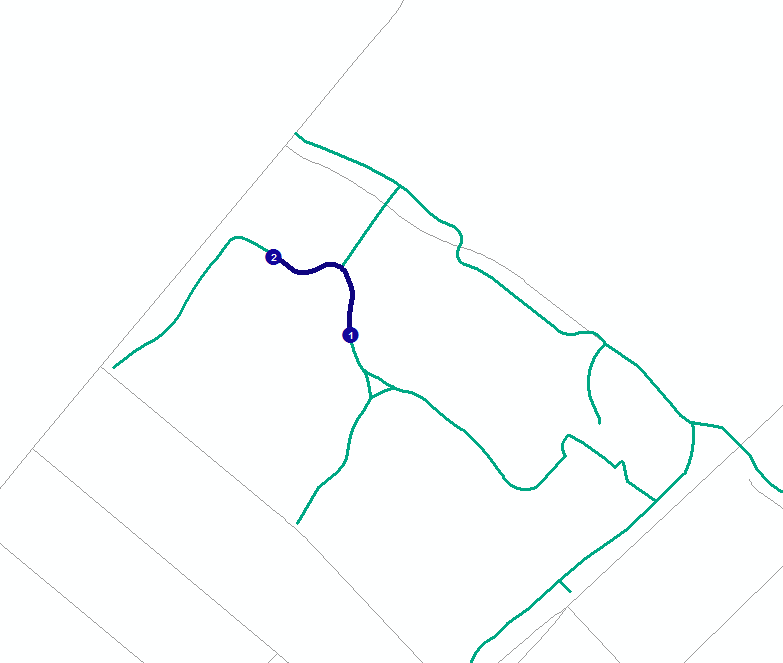 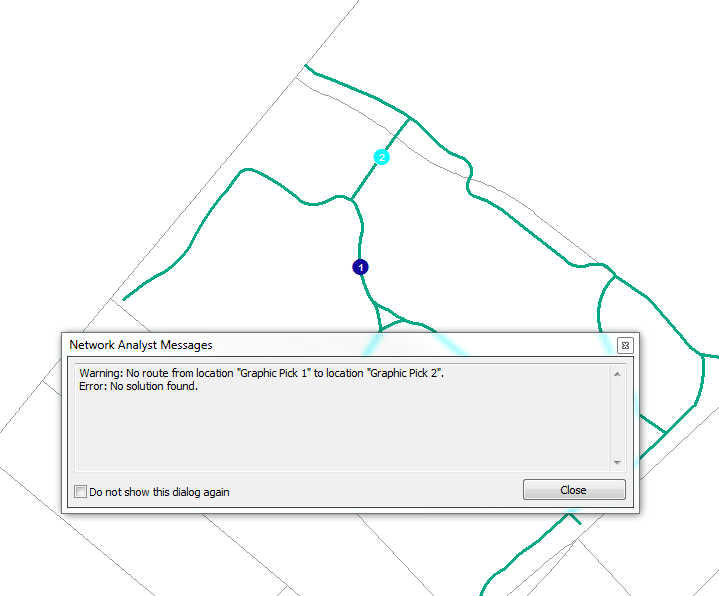 I just have to ask, are you 100% sure the lines you show actually "touched" each other before the integration?  The upper image dosen't mean much to me, it should behave like that without the integration, right? But the lower image says to me you have a disconnect at the intersection (and I use that word loosely) with the polyline with the #1stop and the polyline with #2 stop.  Run a topology on them looking for gaps and see what happens....

The upper image is the example where it works. Good suggestion for running a topology. I did, but it shows that there are no gaps or dangles at that intersection.  I also manually edited and snapped the intersection to be sure. The odd thing is that this same problem exists anywhere on the network where there is a t-intersection between two segments (where a bike path intersects the edge of another), but it is not a problem where two segments connect at endpoints.

.....  but it is not a problem where two segments connect at endpoints.

The only thing I can think of is you don't have connectivity defined in your network as vertices but only endpoints?  I thought that was the basis of this discussion.

Yep, that is why I'm a bit confused.  The Connectivity is set to Any Vertex.  It also works when the features cross over. It's just the t-intersections that don't.  I'm going to send the network to Esri to see what they think.

If you'd like, you can send me a copy of those lines you show in your illustrations: JBorgioneATslcoDOTorg

It's nice an quiet around here today....

Just sent you the files. Let me know if you do not receive them. Thanks.