Calculating distance between many users of a handful of facilities, a small hangup

I know the ROUTENAME issue has been addressed many times in these forums over the past couple years.  I have scoured them and am hung up on one point.

In the shortest distance thread it is stated that "You might have to load multiple copies of the same park because multiple people use the same park."  In my case, these are facilities.

In the Re: Finding Distances Between Assigned Locations thread it is stated that "...your 368 locations are repeating. You could do this with some relates...", but there is not direction on how to use relates to generate repeated "locations."

It is just duplicating the facility that is hanging me up.  Please help.  Thanks.

If I'm reading this right, your main question is how to duplicate geometries. Here's how, using Python:

I really appreciate the prompt response.  Thanks very much.

In one feature class (facilities) I have 19 individual points.  I am trying to make hundreds of copies of each point (facility).  Will the script you provided tackle this?  If so, I'm a novice GIS user, could you tell me where to plug in this script?  Thanks again, Darren.

This script will make 100 copies of each feature in the feature class "Your point layer name" (of course, change that to your later name). Change the number of duplicates if you want.

This script can go into the Python window, accessed under the geoprocessing menu in ArcMap.

Beautiful.  I am going to give it a run, but it may be a couple days before I can get back to it.  Thanks so much.

This is what is spit back at me.  Running now, but will go back through the code to make sure I put in exactly what you provided.

That was my fault - I ran my test on a feature class called "ex_centroid". I've updated the script to say "YOUR_POINT_LAYER_NAME" in the Spatial Join call (so, change that to your own).

I was really excited about getting this working, but I am failing right in line 1 somehow.  Here's a screenshot: 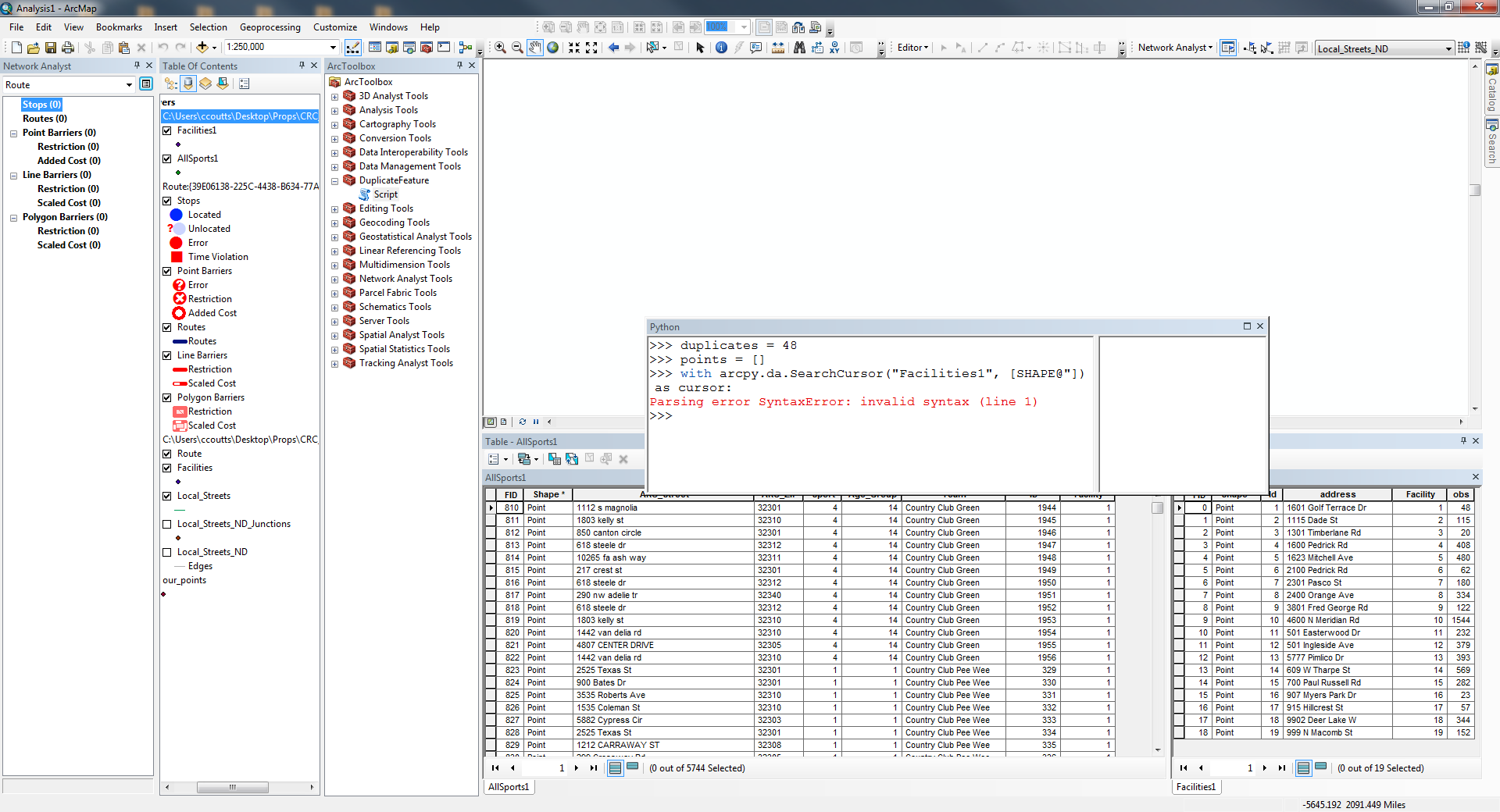 I am really put some time into trying to understand where I was failing before bugging you, but I am stuck.

You need matching quotes around "SHAPE@"

You may be interested in this thread: Copy features a number of times based on a numeric field value