How to prevent layers from being selectable by the select widget in EB?

Does anyone know if it's possible to prevent layers from being selectable by the select widget in EB? Or can that be handled in the Map Viewer? If so, same question as above!

Unless something has changed, the simple answer is "no". There's no way to specify which layers are selectable in either EB or the Map Viewer; if it's visible, it's selectable. I suspect that this is because the select "widget" is currently just an available tool specific to a map, as opposed to a truly separate EB widget, and there's nowhere for those kinds of settings to be stored.

Consider the recent addition of the Search widget. Prior to its addition, a search was only possible within the context of a Map widget, and its settings pulled directly from the map itself. Once a standalone widget was released, it became possible to configure it separately from any other maps.

Perhaps someone on the development team can elaborate on this, but I would expect (and hope) that a true Select widget is on the roadmap somewhere. If EB is really going to have WAB parity, I can only assume that it's simply a matter of time before we see an equivalent option in EB. 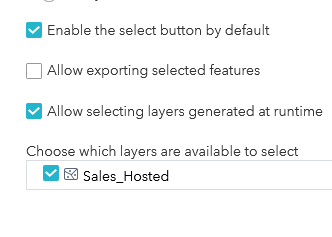 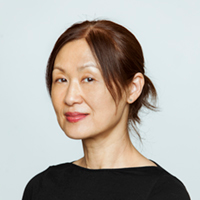 Josh, you are right. We haven't had resources to enhance the Select tool on the map yet. Tools on the map is simply a quick way to get the basic functions in. They do not have as many options as the standalone widgets.

@David_Brooks could you help submit an enhancement?

@Jianxia happy to do that.