I have a comms record that relates back to a property parcel. I want to be able to edit the comms record in Experience Builder. I have tried the following two ways, but unsuccesfully. 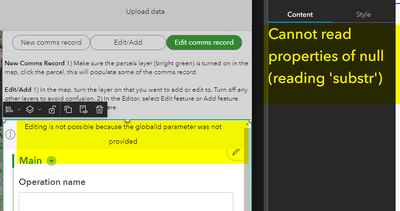 My fall back or temporary solution is to allow editing in the table widget, but I was hoping the Edit widget or Survey widget would pull through here. Am I doing something wrong or is this a limitation of the software because it is a non-spatial layer?