I've been testing the newly released Edit (beta) widget in Experience Builder, and have some feedback and questions. I appreciate it is still in beta so may not be entirely reliable, but hope these comments are of use. All testing in Google Chrome Version 95.0.4638.69 (Official Build) (64-bit).

Firstly, in the demonstration video it is showing the Feature ID as a value (in this case a water network component ID), whereas when I set it up with my own data, it defaults to the ObjectID. Where is the Feature ID pulled from in this widget? I have tried a few different things to get it to pull from a different field but with no luck so far.

Screenshot from 03:08 in the video 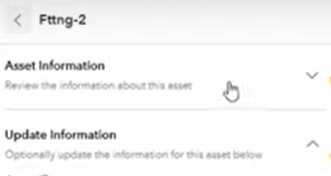 Screenshot from 03:08 in the demo video

Secondly, I have tested the widget in three formats:

In all cases I have configured the same set of fields to appear in the widget (all from a single layer), and have used groups to group the fields.

Approach 1 - edit feature: allows me to click on edit feature, select a feature from the map (sometimes), but then if multiple features are selected, choosing the feature I want to edit in the Edit widget does nothing, and I can go no further. At this stage, the back button in the edit widget doesn't work either. I have to refresh the browser window to do anything from here.

Approach 1 - add feature: I can also add a feature, but after drawing it the whole experience stops working again and I can't add/edit any attributes for the new feature.

Approach 2 - edit feature: allows me to do the whole editing process and update the feature

Approach 2 - add feature: allows me to draw and add attributes or a new feature, as well as add it.

Approach 3 - edit feature: allows me to click on a feature in the list , but only the objectid (feature ID) displays in the edit widget. No fields are available for editing. The objectID does update if I select a different list item, but that is it.

Thank you for posting your comments and questions.

Regarding your first question and the Feature ID, right now the widget is displaying an attribute value in the header. The value is picked from my service's "Display Field", which I have defined before publishing the service from ArcGIS Pro as shown here: Re: what is the display field - Esri Community.

For the issues you have observed with the 3 approaches you have described, I have forwarded your comments for review and the team will get back to you.

@AlixVezina Thank you for your reply. That is useful to understand.
@TianWen I am happy to add you to a group to access the sample app. Are you happy for me to do so?

By all means! My account name is: wentian. Thank you!

@DataOfficer Thanks for reporting these. They might be related to specific datasets. I cannot reproduce them at this moment but I think a sample data or app will be helpful!

@DataOfficer It seems to be a problem with the field configuration. It is supposed to avoid a group nested in another. We'll fix this soon by forbidding dragging a group into another. Thank you for sharing the sample app!

Hi @TianWen ,
I have been doing some further testing of my app, and am still finding that after using the Edit Widget once, the whole map freezes and the browser needs to be refreshed for it to work again.