How can I stop building a tile cache on ArcGIS Server?

I opted to build a tile cache manually, published the web layer, and started the build from Portal.

About 10 seconds later I realized a layer was turned off so I need to cancel the build and publish again.

I tried to delete the service in Portal so that I could republish it, and it won't let me, I just get the ubiquitous "ERROR" message.

I am assuming the in-progress cache build is stopping the deletion? Delete is probably too stupid to kill the build and it's keeping the files locked.

Is there a way to kill the build operation from the server?

I found the web interface. When you start tile generation, the "Create Tiles" button turns into "Stop Creating Tiles".

After more searching I found docs on how to manage caches in ArcCatalog, but the tools were grayed out. (And yes, I did connect with an admin account.) There is no "stop building" option. 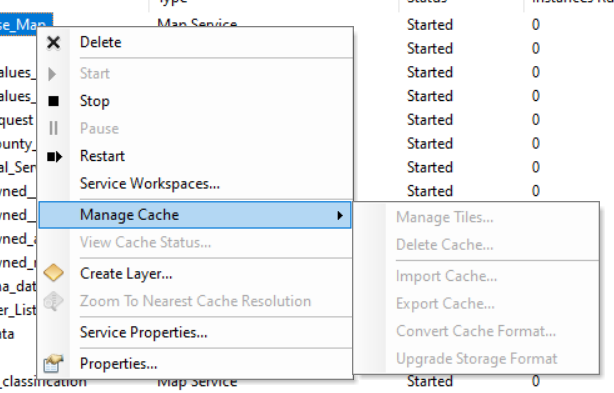 You need the menu option directly below that, which is grayed out. View Cache Status... has an option to cancel caching. See View cache completion status—ArcGIS Server | Documentation for ArcGIS Enterprise  for details.

I know I've had a problem with those tools graying out before. Seems like the fix was something stupid like closing and reopening ArcCatalog. I'll see if I can find any documentation and get back to you.

I found the web interface. When you start tile generation, the "Create Tiles" button turns into "Stop Creating Tiles".