we are running on a virtual server with 12 physical cores/ 24 virtual cores and we are not seeing any relevant perfomance boost after upgrading from a 8/16 core setup yet.

We are setting the MAX_Number of instances for the cachingtools service according to this ressource to 22 cores (it should be 25 ... 2n+1) to let some space for parallel threads on  the machine.

With regard to the best practice paper we are now also setting the MIN_Number to 22.

Running the tile cache creation on my desktop I saw, that it was running level 0 with one bundle eg 1 core, then going up to level 6 and still only one bundle and one core utilized. in level 7 it was creating three bundles and utilized three cores at that time. So there was no parallelization in the lower zoom levels.

On Desktop I was utilizing:

Is the described behaviour also occuring on the server side running the creation of tiles using this arcpy command:

some insight into cache creation: 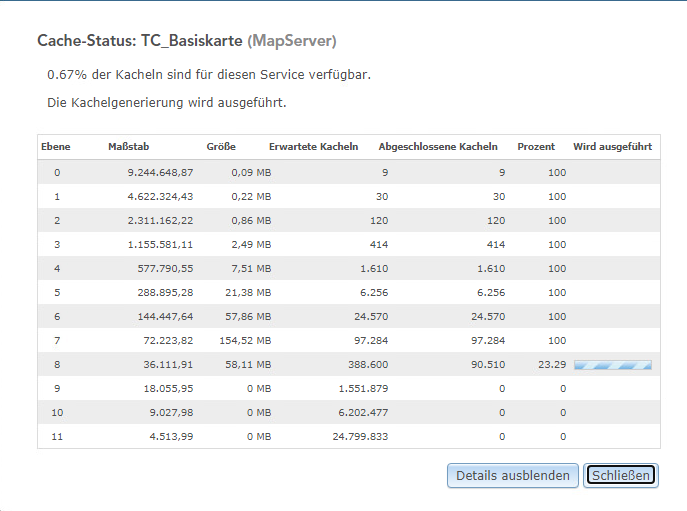 Despite the need to render like hell as not all tiles are created, the server manager shows that not all instances are "active" (screenshot from a test system with 8 instead of 22 cores):

Sometimes it peaks at 6 instances but mots of the times it is showing 3...

I am looking forward your suggestions...