Is it possible to edit the Portal for ArcGIS Sign In Screen?

I have seen this question online a few times, but the responses (although correct) are not quite what I would like to see happen.  We have had Portal set up and functioning well since 2016, but because of system configuration and some security concerns we have (hopefully temporarily) set up our sign in with credentials page a little differently.

I have set up our Portal to use Windows Authentication, which works really well; however, the stipulation that we currently require is that instead of just using one's User Name and Password we require users to type in or Domain as well as User Name, as per below [for the record, GeoPORT is our internal name for our Portal here at the Port in Prince Rupert :-)]: 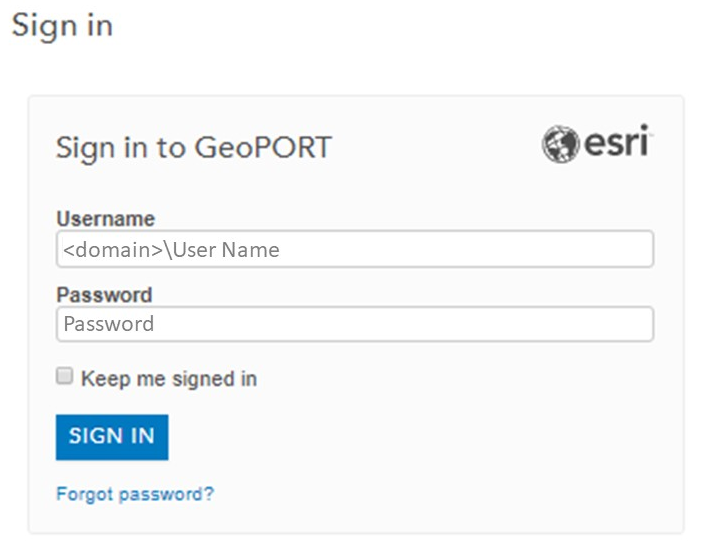 However, this also causes a point of grief as I get calls all the time from staff who state that they are unable to log in, and 99% of the time it's because they're not keying in <domain>\ before their User Name.

What I would like to be able to do is add an instruction to the sign in screen that reminds users how to properly sign in to Portal, as per the example below: 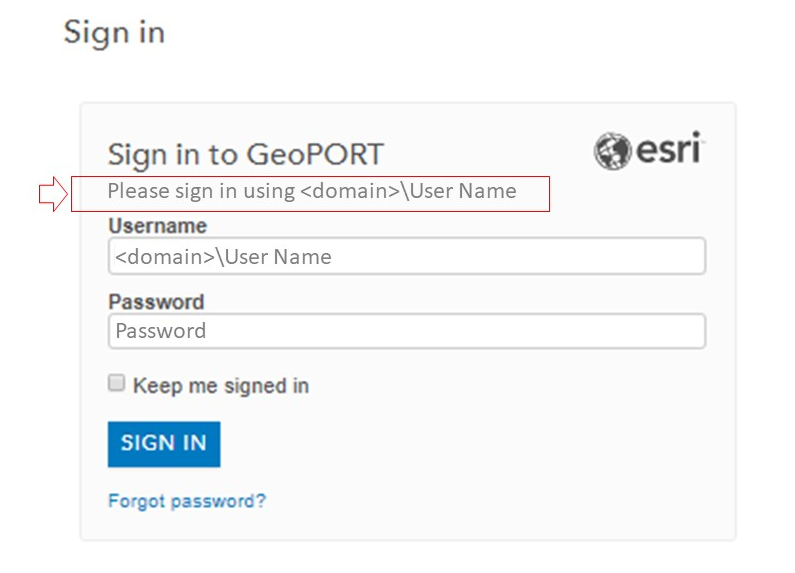 Would this be possible to configure in Portal?  It has been suggested that one needs to edit the oauth2.js file, but I don't seem to be able to notice any differences to that file after making minor (temporary) edits.

What version of Enterprise are you using?

Editing the oauth file should work. Search for "Sign in to GeoPORT". Use the devtools to find that element if it's not working and disable/clear the cache.

Thanks for the response and the direction.  I was reviewing the oauth.js...I just wasn't sure if that was the right file.  Now that you have reaffirmed that for me I can approach this with a little more confidence.  I'm not a developer, but what I'm trying to do isn't that major either.  I'll keep plugging away at it and something "should" work eventually (and I'll make sure I make a copy of the file(s) before I start poking and prodding too) :-).

I seem to be in the habit of clearing the cache often so that should be a relatively easy task.

That is the path I'm using to find the oauth2.js file too.  Does it matter which file I edit (i.e. oauth.js or oauth2.js) or should I ensure that whatever I do to one file I should also do to the other?

I only needed to modify oauth2, but YMMV. I would recommend using the Developer Tools in your browser and disable the cache when doing modifications. In Chrome it's under DevTools > Settings > Prefs > Network > Disable cache.

Thanks again...most appreciated.  That was crucial for me as I needed to learn if I'm at least on the right path and trying to edit the right file :smiling_face_with_smiling_eyes:.

I now have something on which I can work.  I will certainly use your Developer Tools suggestion too...every little bit helps.

Admittedly, none of this is my forte and I'm struggling to start.  How does one edit the oauth2.js file so that changes will be reflected in the Portal log in screen?  If I can learn what needs to be edited by making a small change and seeing that reflected in the login window I can then start to add HTML code to enhance our Portal login experience.  Ideally, something like this would be perfect for our organization: 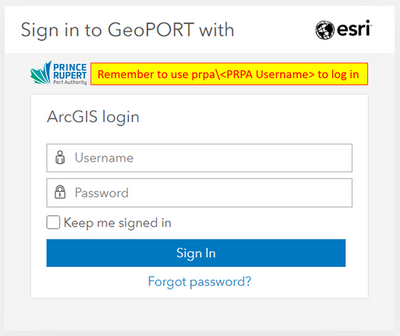 I have tried to edit this file (using Notepad++) to make a minute/subtle change to see if this works (i.e. if I could get that to work then I would know that I'm at least dealing with the correct .js file), but none of my changes made any difference.

Suggestions? (and don't say take a Javascript course as that's too obvious LOL).