Both single sign-on and anonymous access to Portal for ArcGIS (10.4)

We've set up our Portal environment using Integrated Windows Authentication (IWA) giving our user a single sign-on experience using Windows Active Directory (AD). The problem we're facing is that any content being accessed by someone without a name user are asked to log on to the Portal even though the content is shared with "everyone".

We want our named users to have the full Portal experience whereas our non-named users should only have access to content that are shared with "everyone". Is there a way to configure both single sign-on and anonymous access to the Portal?

Did you get this question answered?

Is it possible to have a Single Sign-On environment for users in Active Directory (don't have to log in to Portal) and anonymous access?

Aside from that, SAML is your best bet.

Hi Jonathan Quinn, are you able to please provide more info on how to go about this with a split DNS? I'm trying to do just that (two web servers, one internal with IWA and one external with anon auth). I have set WebContextUrl but I when I install the second Web Adaptor it replaces the first.

Portal for ArcGIS only supports a single DNS.

I'm assuming that the note meant "single FQDN", which is more appropriate.

On each Web Adaptor machine, what happens if you reach the Portal via the Web Adaptor? Does it resolve and take you to the Portal home page?

I've since discovered that, if you register a Web Adaptor with the same URL as another, the first WA no longer appears in .../portaladmin/system/webadaptors. The first WA continues to work, at least for the first few hours (i.e. it might stop working later after the security tokens expire?). Regardless, this isn't a good solution because future admins won't see the full picture of WAs at .../portaladmin/system/webadaptors.

Both WAs now appear in the list because they have unique URLs. Even though the WAs are registered with different URLs, they're still accessed using the common web context URL as IIS remains bound to that FQDN as well as the machine's FQDN.

My presumption is that this is because multiple WAs would normally only be used in high availability deployments. In this scenario, all WAs would have unique URLs, and they would sit behind a load balancer using the web context URL. Therefore, all WAs are expected to have unique URLs. A split DNS needs a bit of trickery to get around this because the WAs genuinely share the same URL.

Hey Guys. If you're here you must be stumped. Some super smart folks in our organization have figured this out and I just want to post their findings. They are OK with me sharing it. I didn't do this, i'm simply conveying what worked for us and our client.  (I'm NOT this smart)

Requirement: Allow public access to publicly-shared items in Enterprise GIS, which using IWA for internal users. Server federated w/Portal, client to publish map services, maps and apps to share, some with general public, others with internal users. Does not want anyone to have to log in (except internal users that will have to authenticate with IWA with their domain account on first access).

I created a second machine and installed my Portal and Server Web Adaptors redundantly. The first machine uses IWA and the second uses anonymous authentication. Internal users are directed to the first server and external users are sent to the second server, but all of them use the same WebContextUrl as a point of entrance. 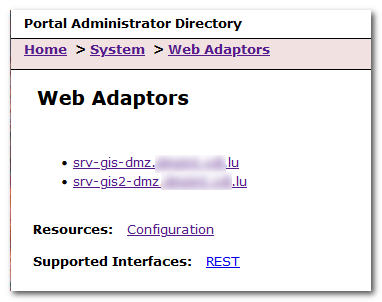 I'm trying to do the same - have internal users go to one server and external to another.

As You can see above in my screenshot, I indeed managed to install both Portal WA on different machines pointing to the same Portal.

In my Enterprise 10.9.0 environment, the existing WA was not overwritten. This is, what happened to You? 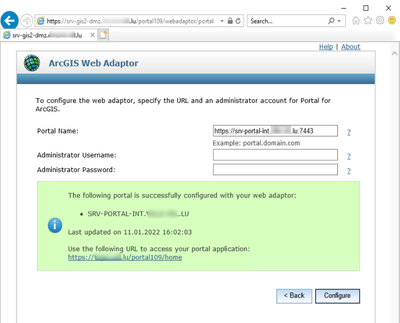 I did get mine working... I found the following order to work for me:

2. Install a web adaptor on the Portal server

4. Install the 2nd web adaptor (in my case this one is in the DMZ.

Question for those who are using both IWA and SAML on the same Portal - how do you handle the different usernames? In my setup, the username sent to Portal is different between IWA and SAML:

The first one came from IWA (username@domain) and the second from ADFS (email address). This creates a problem for managing users and content.