Issue with viewing data points in a dashboard

I have a dashboard aimed to show the work done by my companies field ambassadors. Specifically, I want to create a graph that highlights the work done by our Field Coordinators that is connected to the map display so we can highlight the entries of one of them.

I have a map of all the points connected to the dashboard, but when I went to create the bar graph, not all the points are being attributed to each person properly.

According to the graph Michael Crooks has only a handful of points attributed to him, but he should have at least 55 points if you look at the data tables. Same thing for Lori Gilbert.

Another Issue is that Cornelius Famble's points do not appear when his bar is highlighted. I also noticed that his name is the only one with an underscore between his first and last name. 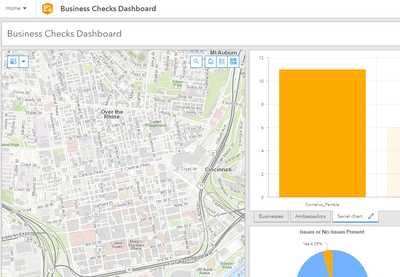 Anyone have an idea what might be causing this? I know there are a lot of layers and they each are linked to the other charts and maps so that could be messing things up.

Possibly filtering the target based upon map extent? (Map Properties --> 'Map Actions') or a rogue filter you have on?

It is not the map extent, even though I have it on this still occurs even when zoomed out. I tried recreating the dashboard and it seems like it is an issue with the data itself.

I am also having a problem with underscores in Dashboard.  In a Survey123 app a value in our dropdown list is Non_GPC somehow it gets translated into Non-GPC but there is no "Non-GPC" choice for the feature so the Dashboard filter for Non_GPC yields no results.  I have to manually change the translated values to the choice with underscores in the hosted feature layer created by the survey.

While I don't have an answer for you, the problem seems to be in the backend.  The issue might be better addressed by ESRI's developers.