After giving a demo of launching a Survey123 form based on a related table on a Collector map, users were concerned about the number of clicks required to launch the Survey123 application, complete the form and get back to the map. Field users like the idea of using a map to determine where to go to complete inspections, and they like the data validations of Survey123; the downside is the number of clicks it takes to go through the entire workflow. I am wondering if anyone has recommendations for reducing clicks, while maintaining the following requirements. Thanks! 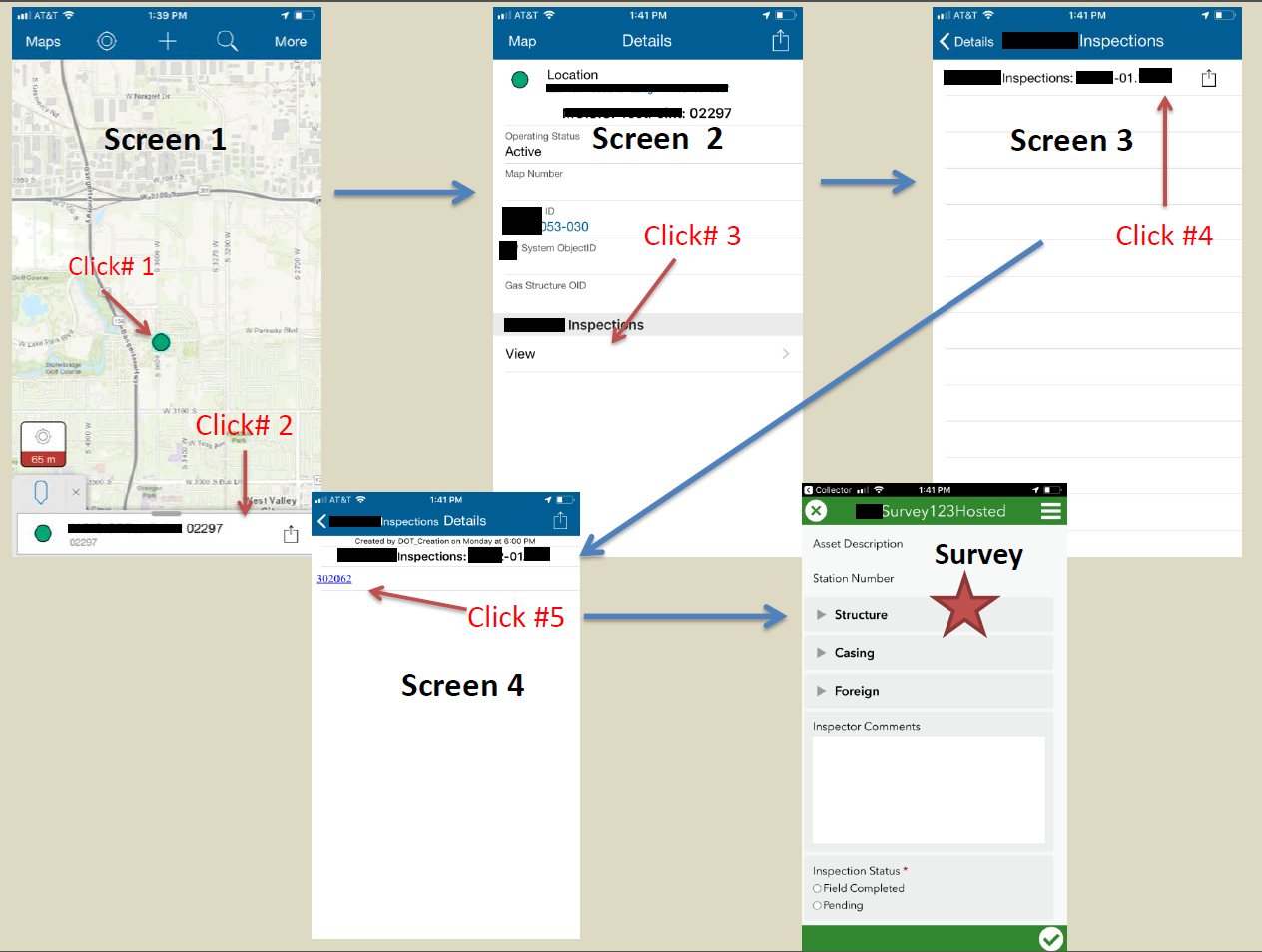 1) Use Collector to show available inspection assets (a generally static data set, but displayed dynamically based on a definition query to only show features with a related inspection)

2) Pass Survey123 some attributes from the related inspection table to pre-populate the survey form (this blog was extremely useful: https://community.esri.com/groups/survey123/blog/2016/07/30/understanding-survey123s-custom-url-sche...

I am wondering if there is a way to reduce the number of clicks it takes to launch S123, but also allow for marking a Collector feature attribute “Complete”.

Here is what I have tried so far: 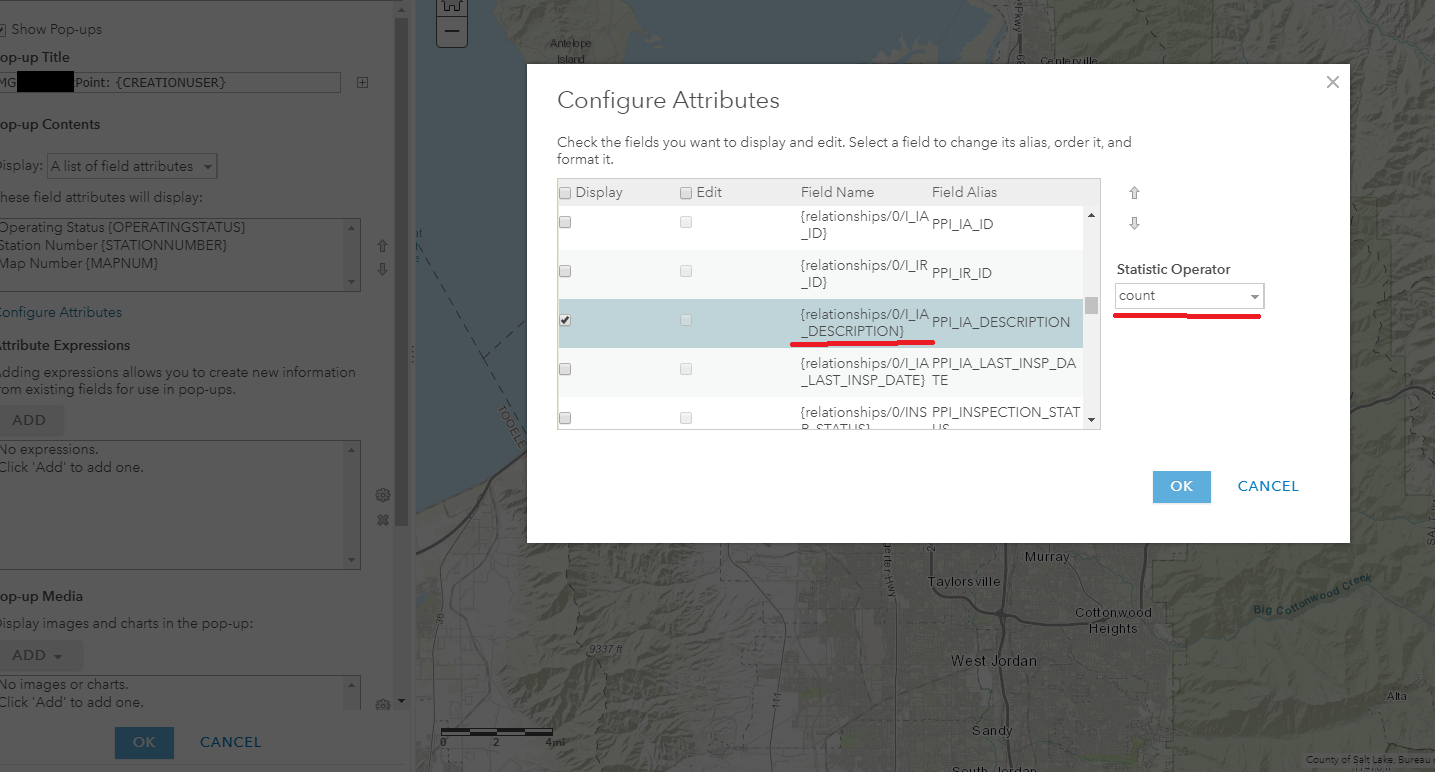 2) Adding “Pop-up Media”: I added an image to the feature’s pop-up and put my custom URL in the Link field, but it appears as though Collector does not process the URL, and Collector displays a blank screen with “Open in Safari” in the top right.

3) Storing the URL as an attribute of the GIS feature: I put the entire URL in a column on the feature. S123 launches, but does not open a survey.

I have thought about creating GIS features out of the individual inspections, but field users would still need a way to update an inspection status attribute on the feature, and as far as I know, you can’t have a custom popup AND edit attributes from the same popup.

As a side note, our Collector-only users love the app. We are hoping to leverage a lot of the things Survey123 excels at, while still providing a great mobile mapping experience.

Can you reach out to me via phone or email?  I can't help you with the question you have, but it appears you may be doing something I'm trying to accomplish - with your existing workflow.

I want to use Collector with a hydrant layer to choose a survey point.  With the ability to see the related table information that has been collected for the point previously from Survey123.  My hyperlink for opening the survey was going to be in the hydrant layer attribution.  BUT it appears you are opening Survey123 from the "view tables" pop-up?  I'm curious how you set that up.

Thanks in advance for any assistance!  My contact info - kratliff@oldhamcountywater.com or 502.222.1690 during business hours.

We actually decided to not go with related tables, due to the number of clicks. Instead, we are only displaying assets with a pending inspection, using a definition query on the map. It sounds like you want to see all the records for a given asset in your related table and have a link to a Survey123. I am not sure how to do this exactly. I have done the following on the related table:

Select the related table in the webmap and set the pop-up to "A custom attribute display", then select all the fields you want to see. On one of those fields, select the "create link" button and set a custom URL to take a user to the survey form like: arcgis-survey123://?itemID=123abc&field:ID={I_ID})

I think the problem is when there are multiple records, is Collector going to know what to display in that pop-up? Maybe you could put a custom pop-up on the feature to take users to the Survey123 form, then leave the related table in tact and set to "A list of field attributes" to just display the records.

Please let me know if you would like to discuss more, I am happy to reach out via email.

I am trying to set up something similar launching my survey123 from the pop up in a feature layer in Collector. The problem I'm running into is that often in the field we have no service and have to run offline, the link doesn't launch the survey when we are offline. Is there a way around that?