Am new to city engine but have been working on it for a few days now, seems pretty interesting in generating 3D models, been working with the default CGA rules that i manage to download. I had an issue while trying to develop an overpass bridge over an roundabout, the overpass is ment to act as a link to two bike lanes that are diconnected by the roundabout.

After geting my streets from get maps data OSM data, option I  created a street to act as an overpass but when I try generating a bridge from the "Generate Bridges" tool it does not extrude above but levels down same as the other streets, I was forced to elevate the street crossing over the round about by using the move tool. my problem come in when I want to produce pillars to help support the bike street above that crosses over the roundabout.

Anyone with an idea on how to go about this please, I'll appreciate the help

Consider these two streets which seem to cross each other but don't actually intersect (there is no graph node at the intersection).  One street is the elevated bike path, and the other is the busy road underneath the bike path.

If one street has a smaller street width than the other street, then the Generate Bridges tool will automatically decide to put the narrow street at a higher elevation, making it the bridge.

Select the streets and run the Graph -> Generate Bridges tool.  The bike path will be elevated 5m above the road since Level height = 5.  The object attribute called layer is used to determine which street is on top of the other. 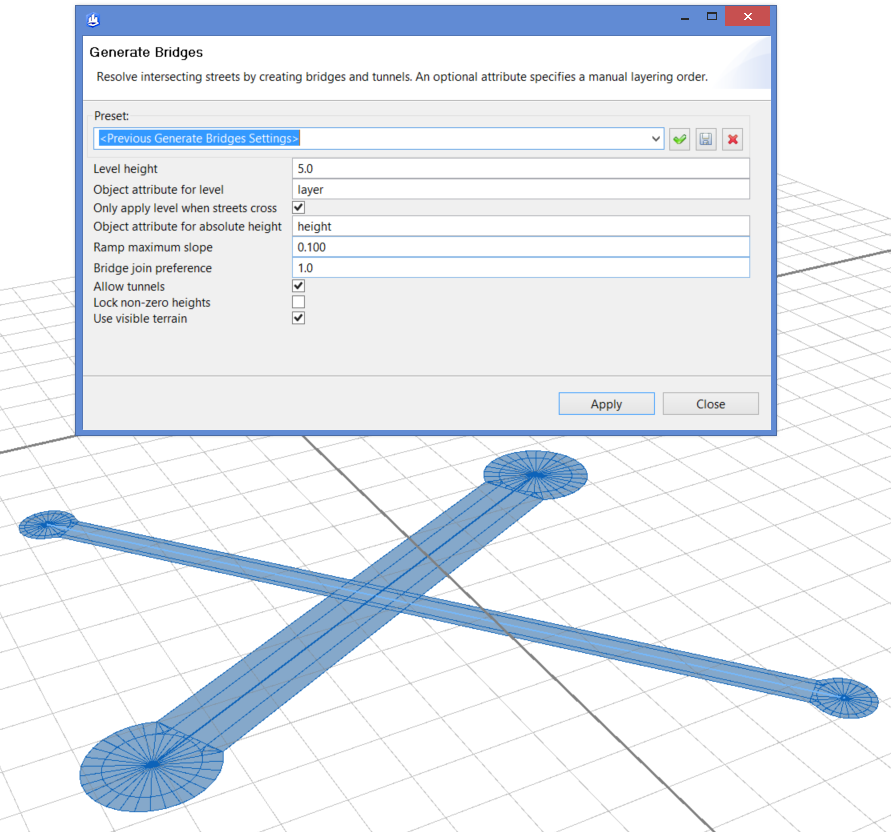 In the Complete Streets example (Help -> Download Tutorials and Examples), the Complete_Street.cga and the Advanced_Street.cga rules both offer options to create bridges with pillars underneath.  The Bridge attributes can be found in the Inspector.

Here is the result of applying the Complete_Street.cga rule to the bridge.

For more information about the settings, please see the help docs:

This video is about created an elevated rail guideway: