Aiming at a map of urban area flow paths caused by extreme rainfall I am trying to figure out the most reasonable approach.

What I can apply:

unfortunately only a rather limited amount of time, as it is only one aspect of my project.

Any advise on whether it is a good idea at all to use ArcHydro, things to do and to avoid is highly appreciated! My impression is that most people use ArcHydro on landscape scale. Do I overlook an alternative other than a costly (in terms of money and time) hydrological model?

In flat urban areas the underground storm drain system collects most of the flows. The roads have high points and low points that obscure the overland flow paths that a DEM can't really reveal. Roads over culverts or open channels can also "block" flow direction.

What I do is I get (or create) a layer for the storm drain system. I copy those polylines into my agreestream layer. I run the Arc Hydro processes thru the flow direction step. Then I use the flow path trace tool in the Arc Hydro toolbar to check if everything is flowing correctly. I also use the Spatial Analyst math tools to subtract the rawdem from the fil raster (final hydrologically correct DEM). This shows me the differences the geoprocessing (DEM Manipulation, etc) makes to the DEM and I can find places that I need to add more to the agreestream layer.

Where needed I create innerwalls (and once in a while outerwalls) to block the flow direction where I know it wouldn't go. You'll need to determine how far you want to go with this. You could spend forever perfecting the hydrologically correct DEM because it will never be perfect.

This is not a quick process if you have a complicated urban watershed. It is an iterative process so I use Model Builder a lot. You may find you are manipulating most of the DEM to flow where it should flow. There are readymade Arc Hydro Model Builder models for most of the processes. This helps get the process right.

I keep a countywide agreestream layer (as well as innerwall an outerwall layers) so that my work can be saved for future studies in the county I work for. I keep these in a geodatabase because the geodatabase seems to be more "stable" than a shapefile.

Mark, thank you very much for your extensive reply.

Our project's focus is on flooding events caused by extreme rain storm events. As in our cases the drainage system is then unable to collect any more rain water (it is all busy with the rain that fell until the most intense cell arrives) we believe that for our purposes it is justified to simply ignore the drainage system.

Concerning roads, culverts etc.: I created a "river" layer in which rivers, little lakes and culverts (only those culverts linking bigger water bodies, i.e. those we do not expect to be blocked in the events we want to explore) are combined. Does this sound reasonable in your opinion?

"You could spend forever perfecting the hydrologically correct DEM because it will never be perfect."

Alas. And while I would rather enjoy investing time and effort here I can only spend just enough to produce something helpful for the urban administration people who provided the data. Which is anything not completely implausible = more than they have yet.

I'm unsure how to deal with my DEM concerning quality in general. It is based on laser scan data with buildings eliminated. I do have layers on buildings (possibly my innerwalls?) and streets. Its 1-m-resolution makes it a 3,2 GB monster. Does the advice on how to convert DEMs also apply for an urban area? Do you agree that in my case I have to be careful not to eliminate too many of the sinks?

I appreciate your practical advise on how to actually do it and hope to come to the point to follow it. I still wonder if I'm asking to much of the ArcHydro tools (given the time I can invest and the information I'd like to get) and if there might be alternative approaches.

If you are just "Aiming at a map of urban area flow paths caused by extreme rainfall I am trying to figure out the most reasonable approach" and not looking to delineate the watersheds, then you only have to get to the flow direction grid. There are not that many steps to getting there.

If you have polygons of the buildings, then you could use those as innerwalls.

I think I understand what your are trying to do, but I could be misunderstanding. If you have sinks inside the DEM, the flow paths will end at the sinks. You won't be able to tell where the low areas overflow to once they fill up. You could do this, but when a flow path stops at a sink, you would have to add a pour point at the low point on the "rim" of the sink to see where the overflows would go.

I haven't used this tool, but the Generate Flow Path tool in Arc Hydro Tools might do this for you. You'd need to create batch points where you want to start the flow paths at, run the tool, add flow paths at the "rims" of the sink areas and then run it again. Depending on how many you have, this could take some time. 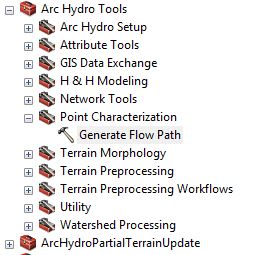 If I were you I'd burn in your rivers and fill the sinks and then create the flow direction grid. Subtract the rawdem from the fill raster. Then symbolize it so that the zero values have the color "null" and the rest of the cells in the fill raster are on a color ramp with the deeper cells darker (I use blue ramp), you will be able to see where the sinks are and determine how much work it would be.

I will do the following:

- chew the implication of filling sinks over

Before getting started I have two more questions @"Also, processing from your local drive is much faster then processing over the network.":

Is that C:\ coercively or does another partition of the same hard drive do as well?

And is there an option to tell ArcHydro where to put the temp files? (I did read about setting the target location in your problem solver collection.) My first tests (not even using that DEM monster) crammed the machine's C:\ drive with fairly big temp files.

I haven't done anything other than make a directory I named \GIS on my C: drive. I've not mess with partitions.

I don't know off hand how to change the temp file location.

I looked over the file location options that I can see and found nothing.

Then I did a search and found this: Redirect ArcHydro 2. temp directory​. It looks like the temp directory used by ArcMap and Arc Hydro is the same Windows default directory.

I followed the instructions in my Windows 7 environment and it worked.