The Importance of Terrain Analyses

Quantifying the characteristics of terrain can be beneficial in many analysis workflows including sediment transport modelling, ecological studies, geomorphological evaluation of land forms, and landslide hazards assessment. To help with terrain analysis, Arc Hydro is adding a Terrain Ruggedness Index (TRI) tool and a Vector Ruggedness Measure (VRM) tool to its terrain pre-processing capabilities.

How TRI and VRM contribute to Terrain Analyses

TRI expresses the amount of elevation difference between adjacent cells of a DEM. Using methodology developed by Riley et al (1999) and published in the paper “A Terrain ruggedness Index That Quantifies Topographic heterogeneity”, the tool measures the difference in elevation values from a center cell and eight cells directly surrounding it. Then, the eight elevation differences are squared and averaged. The square root of this average results is a TRI measurement for the center cell. This calculation is then conducted on every cell of the DEM.

VRM provides a way to measure terrain ruggedness as the variation in three-dimensional orientation of grid cells within a neighborhood. Slope and aspect are captured into a single measure and used to decouple terrain ruggedness from just slope or elevation. The VRM was first proposed by Hobson (1972) in “Surface roughness in topography: quantitative approach” and was later adapted by Sappington et al (2007) in “Quantifying landscape ruggedness for animal habitat analysis: A case study using bighorn sheep in the Mojave Desert.”

Both tool scripts use geoprocessing workflows developed by Dr. Barry Nickel, a professor at University of California Santa Cruz.

Where to Find TRI and VRM

Many ecologists and geologists have employed TRI and VRM to further their research and understanding of terrain. Prior to this tool release, analysts had to derive both TRI and VRM through a series of geoprocessing steps or had to write their own custom tool. Now, both tools are available under Arc Hydro's Terrain Preprocessing toolbox in ArcMap 10.8.0.26 and ArcGIS Pro 2.6 in Arc Hydro build 2.0.211. 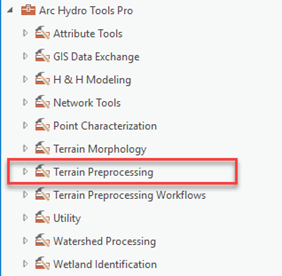 How to Use the Tools

The TRI tool requires only a DEM as an input. The output is a TRI raster data set that expresses the amount of elevation difference between adjacent cells of the DEM in meters. Output values are dependent on input DEM resolution. 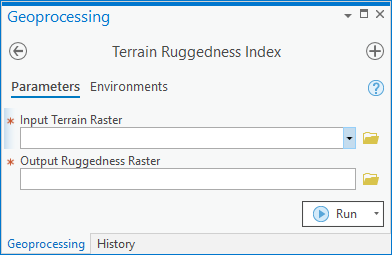 The VRM tool has two input parameters. One is the DEM for analyses, and the other is an integer specifying neighborhood size for analyses. A larger window size can be useful, but often causes a smoothing effect on the landscape, so as a default, the window size is set to 3. The output is a VRM raster data set that is a dimensionless ruggedness value between 0 (flat) and 1 (most rugged). Typical values for natural terrains range between 0 and 0.5, with rugged landscape defined to be greater than 0.02. 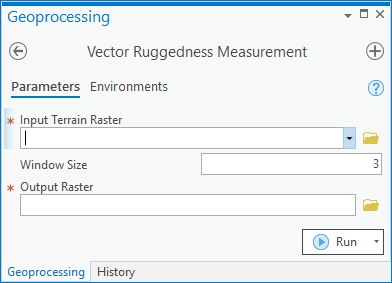 This is good news, and exactly what I need!

Hi! I'm so glad that someone has created a TRI function. However, I tried to run it and am coming up against this error:

Any help would be appreciated, thanks!