Esri and the Scientific Community: A Portfolio

THIS PAGE IS NOW AN ARCHIVE AND WILL NO LONGER BE UPDATED.

LATEST UPDATES, AS OF SEPTEMBER 10, 2019, ARE NOW AT www.esri.com/sciences

Science at Esri continues to evolve on many exciting fronts, as we focus on supporting both basic and applied science, while also recognizing that there are many major themes of compelling interest to society that will drive scientific research for the next several decades. Thus we view science as helping us to understand not only how the Earth works, but also how the Earth looks (e.g., by way of geodesign), and how we look at the Earth (i.e., by way of Earth observation in varying forms and the accompanying data science issues of analysis, modeling, developing and documenting useful datasets for science, interoperating between these datasets and between various approaches). These are, in fact, examples of The Science of WhereTM. 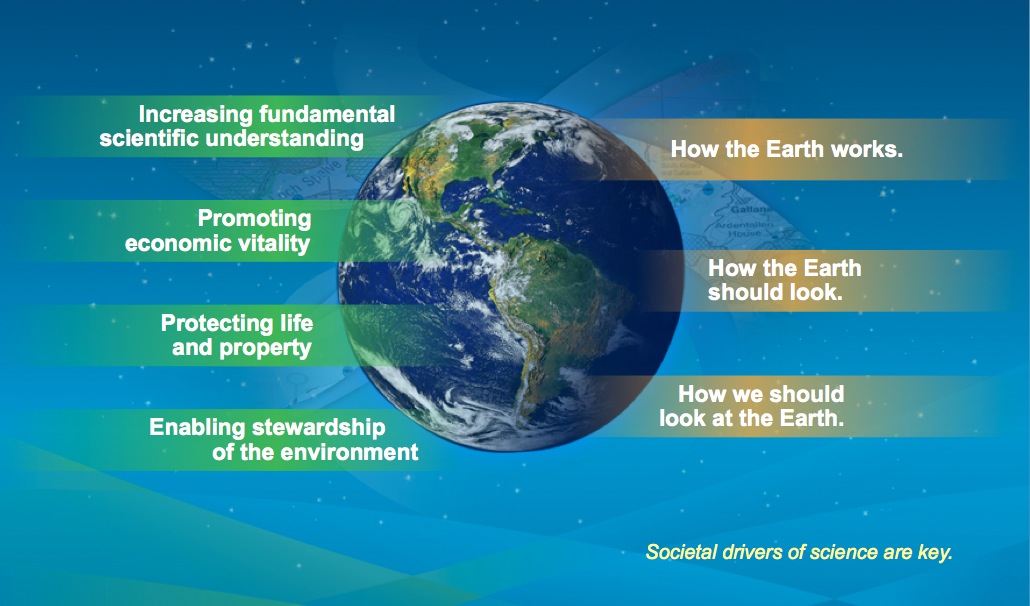 There are many major themes of compelling interest to society that will drive scientific research, at least for the next two decades. And thus we view science as helping us to understand not only how the Earth works, but how the Earth should look, and how we should look at the Earth.

In addition to supporting the science community, we seek to do good science at Esri ourselves, as it underpins much of what we do as an organization. This is helping us to evolve ArcGIS into a comprehensive geospatial platform for science; a platform that supports research project management and collaboration, spatial analysis, visualization, open data, and communication of science, all at multiple scales (i.e., from individual researcher to lab workgroup, to multi-department, multi-university, university-to-agency collaboration, to citizen engagement). 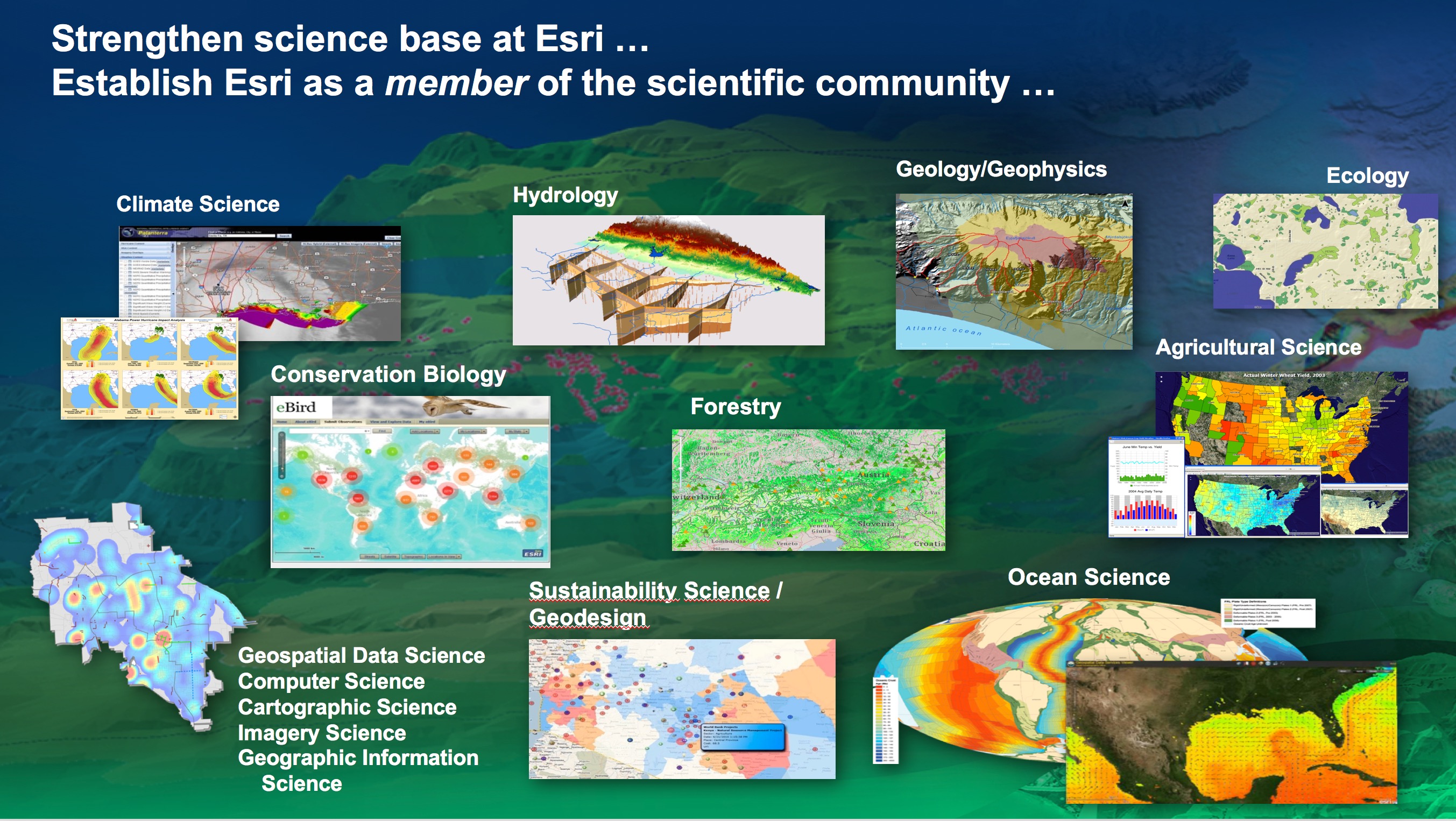 There are many natural science domains in which GIS is being used effectively to understand how the Earth works. At Esri, these are the sciences that we are particularly strong in.

Along these lines, Esri is fairly well known to research labs, universities, and other places where great science is done as a vendor of GIS technology. However, Esri continues to work toward contributing as a MEMBER of the scientific community as well. We define the "science community" as scientists within universities, research institutes, government agencies, non-governmental organizations (NGOs), and similar. As such, Esri maintains objective scientific representation on various scientific boards and councils, including several of the committees within these bodies that accomplish important tasks over the long-term. Examples include:

Our Major Initiatives and Projects 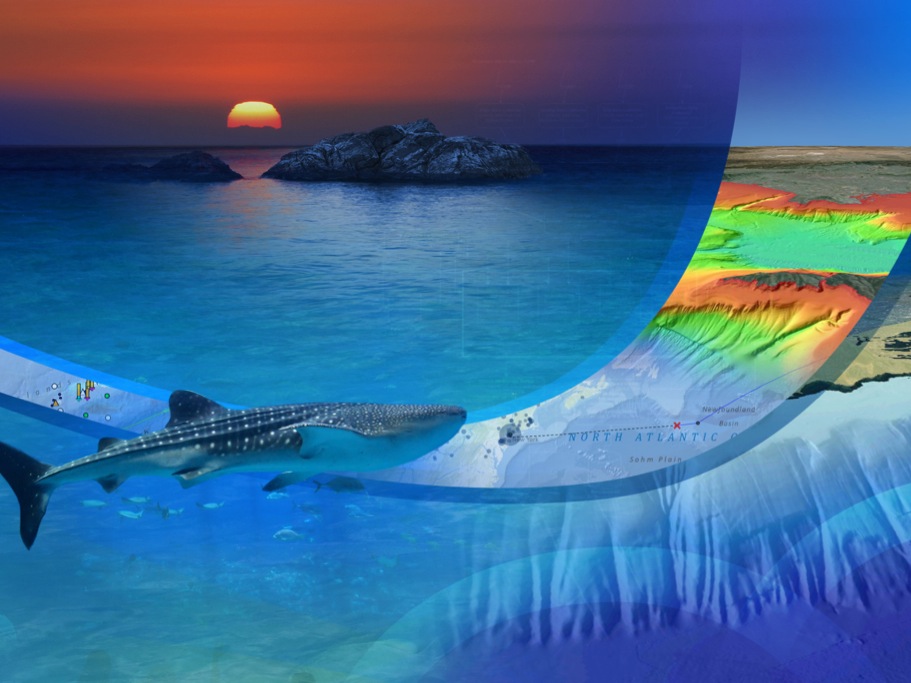 Across the entire Esri organization we have an Ocean GIS initiative that was built on a comprehensive strategic plan. We're also working with a growing list of terrific partners.

Collaborations with Partners in the Academic, Government, and NGO Sectors

There are several ways to keep abreast of science developments at Esri: 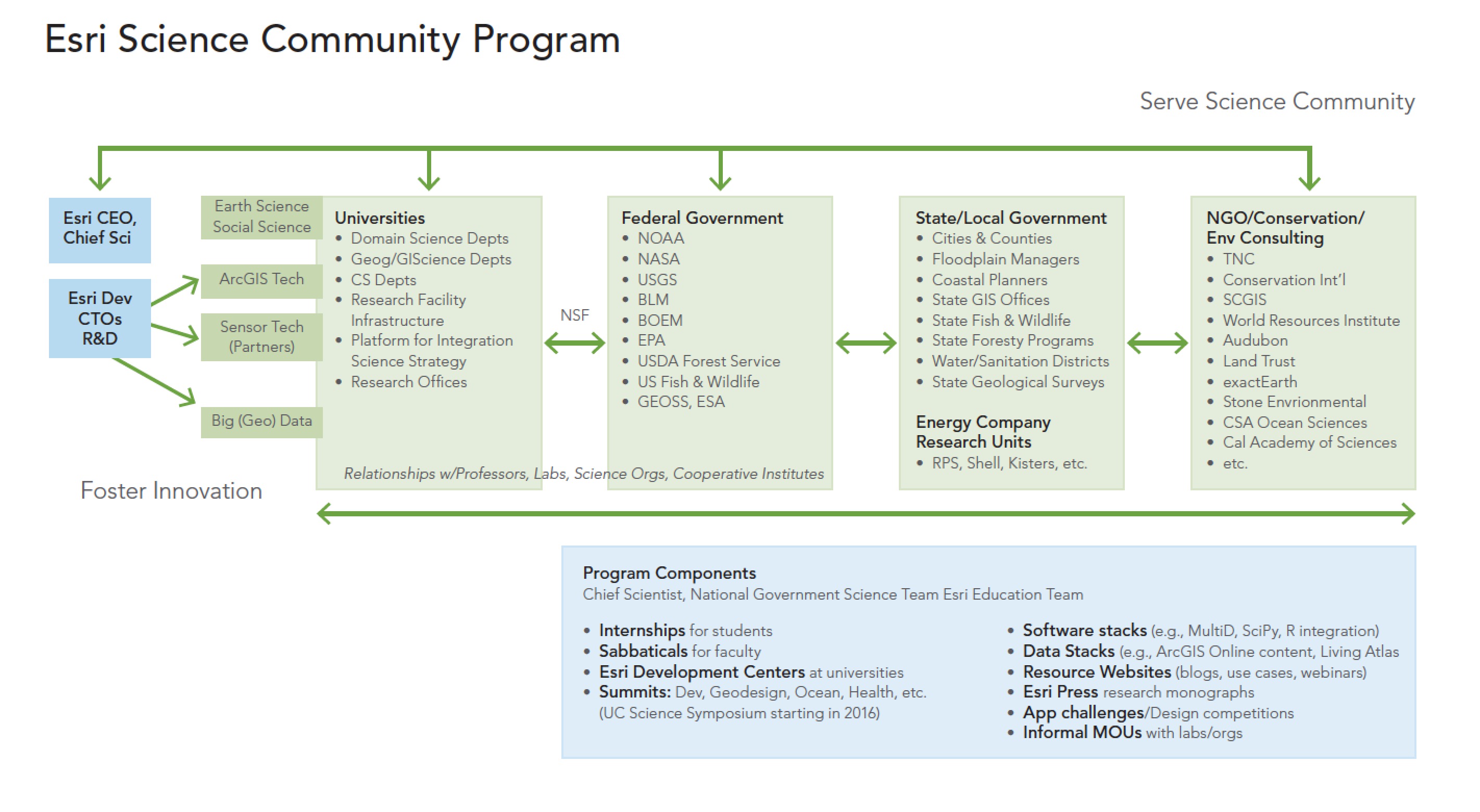 This diagram shows the various aspects of our comprehensive program to support the science community, showing the interlinkages between and among universities, government agencies, and various consultancies, nonprofits, for profits, and other organizations focused on science. Contact the Chief Scientist, Dawn Wright, dwright-at-esri.com, for more information.

About the Author
Dawn was appointed Chief Scientist of Esri in October 2011 after 17 years as a professor of geography and oceanography at Oregon State University. As Esri Chief Scientist, she reports directly to Esri CEO Jack Dangermond with a mission to strengthen the scientific foundation for Esri software and services, while representing Esri to the national and international scientific community. Dawn maintains an affiliated faculty appointment as Professor of Geography and Oceanography at Oregon State. Follow her on Twitter @deepseadawn. More info. also at http://esriurl.com/scicomm and http://dusk.geo.orst.edu.