I've hit a funny problem, I can't set/access my environment. I did a little research and found a similar problem (Not able to set workspace using standalone Python script for ArcGIS). I know that the script was working because it was it was fully functional for me on Friday, and today it can't find my workspace. I've gone ahead and included a shortened version of my script (and image of the notebook from Pro) that I was working with trying to troubleshoot this issue. It includes a commented out line, and some notes I added for clarity.

Thanks for any ideas, they are all welcome.

Set environments - tried single and double backslashes, there are no spaces in my file name. Assigned file path to variable "w" just for troubleshooting this. That is not part of the code

Confirm that I can print file path for my variable "w", yet workspace still doesn't exist.

workspace isn't defined... w is and arcpy.env.workspace is.  You can't do the 'workspace' shortcut

So right you are. I only had the variable in there for troubleshooting this issue, so I tweaked my post to make that clear. Thanks for addressing that.

Prior to the weekend "workspace" was acting like it was defined. I had no trouble referring to files and setting the workspace:

I can include what is left of that code. My notebook inside Pro must have not saved correctly on Friday because I lost a lot of work. Is there anychance that a bad save could have had larger ramifications?

No.  You must have defined 'workspace' earlier on.

I am defining the workspace on my second line of code after calling arcpy with my first line of code defining the ArcHydro toolbox. I must be missing something, especially because the code ran with no issues on Friday. 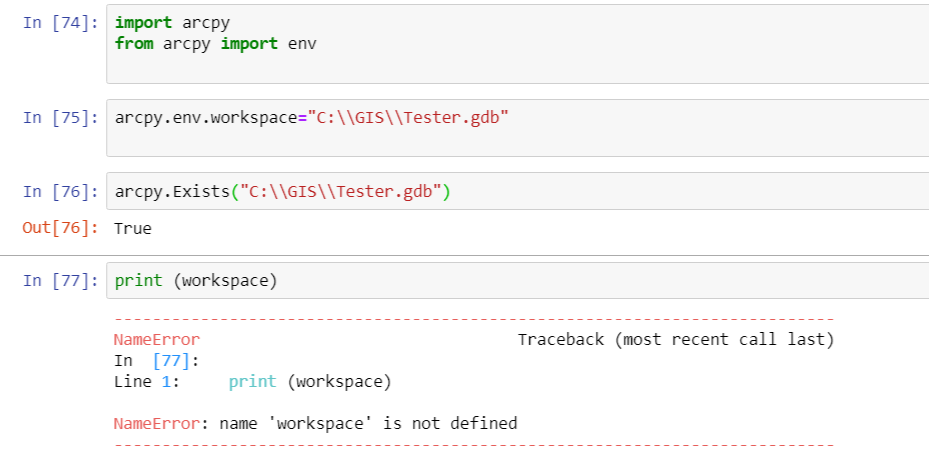 Nowhere do you define a variable named "workspace"

Examine my example as well.

Thanks Dan. After sleeping on it I realize that I tricked myself into thinking that "workspace" was akin to a reserved variable in arcpy. Thus I wouldn't need to define the variable, just assign it via the arcpy.env.workspace and then use it freely the rest of the time.

Shall I mark this as "Assumed Answered" to close the thread or did one provide the solution?

I took the liberty of formatting your code so it's more easily readable.  Please do the same thing in the future.

As Dan mentions, no where in your code do you set a variable called workspace. Line 14 you set w but not workspace.

You should get into the habit of using r strings which is raw text.  That way you can just copy and paste your paths and never ever have to worry about which slash to use or escape:

Thank you for reformatting my text for readability. I am really, really sorry I ever included the variable "w". It just made stuff confusing.

When my code was functioning last week, I was able to print (workspace) and it would print the path to the workspace, that is why I was using the print function; only to troubleshoot my own code.

The script was not finding my feature classes inside of the workspace when I attempted to rerun the code from last week, saying that workspace was not defined. Converting my file paths to raw text seemed to be the fix. Then Pro crashed on me and it is no longer working. The code dies on line 3, when I define my DEM to use. This was working fine for last week and so I am not quite sure would have changed.