I'm using the script here to publish a feature layer on AGOL. This script sets up everything on the "General" tab (Name, Summary, Tags, etc) on the "Share as Web Layer" dialog. However, I'd also like items on the Configuration tab for the feature, like enabling editing but only allowing editors to update feature attributes. 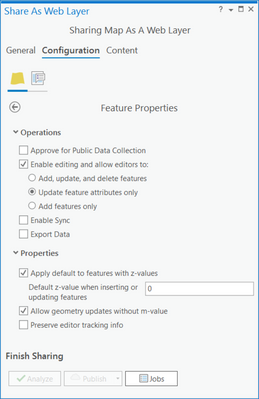 Is this possible in Python or do I have to manually set that in AGOL after the service has been created?

I've always thought when one is interacting with AGOL you tend to do it through the ArcGIS API for Python? I've not done much with automation with AGOL so I may be sending you on a red herring? 😉