To check that it is indeed working properly, I've also created a GDB feature class with the Project tool. Then, I calculate geometry for both the memory workspace output and the GDB feature class, and compare the values.

I get identical geometry values when I run this code from a script tool, but when I run the same code from a Python terminal I get slightly different values. Is there something different about these two environments that I'm unaware of? Also, is there a better way to project a feature class and store the output in the memory workspace?

Check that you are using the same python executable.

There is nothing special about "memory" workspaces.

If you are using arcpy-based methods for the projection, then you should have no differences in geometry (that is, directly through arcpy or via the Project tool)

If you are using non-arcpy based projection (eg. external packages, arcgis module using shapely etc etc) you might get differences.  Just use esri/arcpy based geometry tools for geometry.

Everything is "memory" whether temporary or more permanent.  Just make sure you are working "local" versus network/web/cloud

What is wrong with projecting a feature class and storing the output to the scratch workspace?  You can delete it or keep it as you see fit.

sys.executable returns the same executable in the script tool and Python terminal, and am only using arcpy-based methods for the projection.

After poking around a bit more, I discovered something I didn't notice before. If I open a fresh ArcGIS Pro project without a template, and also without having inserted a map yet, the script tool actually returns the exact same values as the Python terminal. Meaning that the small differences in geometry will be present between the memory workspace output and the GDB feature class.

Additionally, if I insert a map into the project, but do not change the map frame's coordinate system (leave it as Web Merc Aux Sphere), the script tool will also give me the exact same geometry values as the Python terminal. Again, the small differences in geometry will be present between the two outputs.

It would be great to be able to reliable use the memory workspace because it is so much faster than generating outputs and deleting them.

Web Mercator has "issues" with geometry properties such as area and distance/length.  I wouldn't use it for anything other than having to look at something (like on AGOL).

Find a projected coordinate system that is well used for your area if you are working with anything doing with geometry (UTM (sf 0.9996), State Plane (modified transverse mercator sf 0.9999).  For larger extents, do the same (albers, LCC etc) use widely supported variants for your locale

If you are stuck with having to use web mercator for some of your stuff, do geometry on you local machine and web it after.

As for WGS84, I assume that you mean a GCS (geographic coordinate system with decimal degree coordinates, and a WGS84 datum)

I'm not actually using Web Mercator, I was just explaining how I happened to discover the changing behavior of the geometry value for the memory workspace output. Why would the map frame's coordinate system affect that when using a script tool? And yes, you are correct that the feature class I am projecting is in a GCS with WGS84 datum.

Maybe these screenshots will help explain what I'm experiencing.

The first screenshot shows the calculated geometry values I get when running from the Python terminal, and from script tool when ArcGIS Pro is first opened (no map inserted). The values do not match. 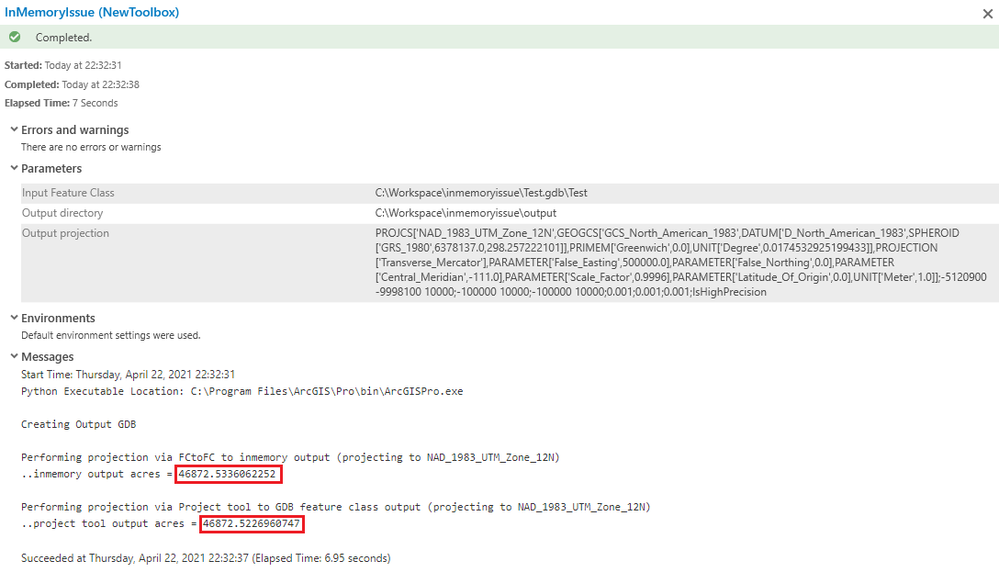 The second screenshot shows the calculated geometry values I get when running from script tool when a map is inserted, and the map frame's coordinate system is changed to NAD83. The values match. 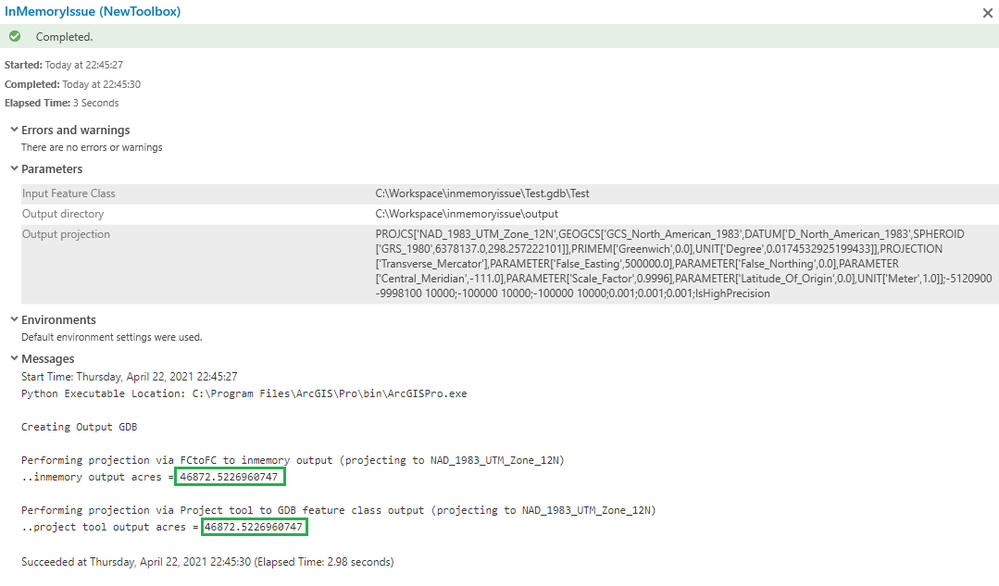 on a lark, change "memory" to the legacy "in_memory"

I can't test since all of my toolboxes and tools work of maps or tables.

The change from "memory" to "in_memory" seems to yield the same results. I've attached a .zip with the toolbox, script, and test GDB feature class if you'd like to check it out. Thanks for the suggestions.