There isn't much to the the arcpy multiple ring buffer.

If the inputs and environments are all the same, no.  The arcpy access calls the same underlying code, eventually, the delays may be in accessing the underlying code.  Direct access will always be faster

It actually calls a script tool, it has a "script" icon 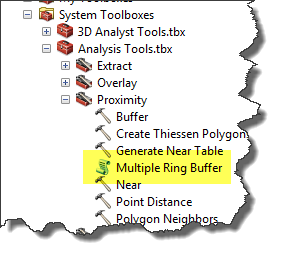 I did find that some one did try to use dictionary to store the ring buffer and create an insert cursor.

I'm getting some strange results in ArcMap 10.4, when I compare the time to buffer multi rings (1 and 2 miles) using a point featureclass with 1000 and 10000 features as a stand alone script, executing the same script in Python window and manually executing the tool:

When using the stand alone script versus the same script (writing to different output) the standalone script will take some additional seconds to load arcpy. Using the toolbox was faster for 1000 points, but when using 10000 points the toolbox took more time than the scripts!

There are many factors that influence the process when executed in ArcMap (geoprocessing  environment settings, coordinate systems (data vs dataframe), etc).

This is the script I used for the test:

I wouldn't go for the script you posted since that will likely take more time.