When creating an OD Cost Matrix, using a Network Dataset with Public Transit Data (that works fine for Service Area generation), the following error pops up already in the Geoprocessing Pane:

Now, the Calender file for the GTFS data is not enabled for generic weekdays.

However, it doesn't change even when going to a specific date. 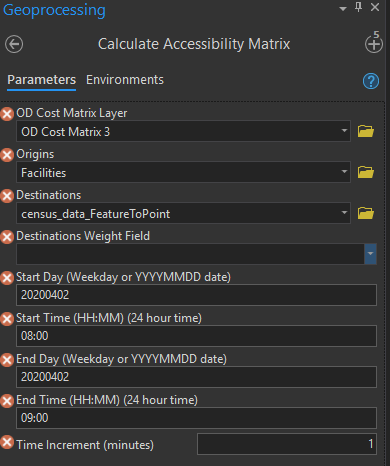 Any input in how to get this right?

Thank you in advance!

I cannot reproduce this problem, but I have an idea about what caused it.  Do you also have the BetterBusBuffers tool on your computer, and where is it saved in relation to the Transit Network Analysis Tools toolbox?  Both of these are python toolboxes, and both of them import a script called ToolValidator, and both versions of ToolValidator have a method called allow_YYYYMMDD_day().  From the error message, it looks to me as if Transit Network Analysis Tools is mistakenly calling the BetterBusBuffers version of that method.  I don't know how it would do that unless you saved the two tools in the same folder or something.

Try a fresh download of each toolbox, and make sure that they're saved in different folders.

Did you ever find a solution to this problem? Another user reported a similar issue to me, and I still cannot reproduce it.

I know this is old, but thought I'd chime in since I just had this issue when running the Prepare Time Lapse Polygons.

I only recently switched to Pro and this was my first time using the toolbox in Pro. I have BetterBusBuffers and Transit Network Analysis Tools in the same parent folder.

- move Transit Network Analysis Tools to another folder. No change in error.

- move Transit Network Analysis Tools to X drive (other drive has no other toolboxes). No change in error.

I'm not sure if creating the new project in the other drive made any difference. I suspect it was just the "new" aspect. The original project I was using that was getting the error had already been used for a lot of other network analysis. My half baked theory is that it had already made some connections to the wrong Tool Validator when I tried to run Transit Network Analysis Tools.

Sorry about this error.

ArcGIS Pro is  kind of weird about script tools that import other modules. It will not reimport the modules unless you close and reopen Pro. So, probably what happened after you moved stuff around was that Pro was still holding onto its memory of the original import and not noticing the change. When you created a new project, it imported everything afresh, and it worked.  I suspect you could reopen your old project, and it would work fine now, too.

The good news is that BetterBusBuffers will be deprecated and replaced with a new tool available in core ArcGIS Pro with the 2.9 release. You will no longer need BetterBusBuffers at all and can use the new Calculate Transit Service Frequency tool out of the box.

Yeah, I restarted my computer and that solved the issue. Classic.

Side note on this tool. I found that if I set the "Geometry at Overlap" to Dissolve, it does not add the TimeOfDay field to the output. It's not the end of the world because I can just run it as Overlap and dissolve afterwards, but it's a bit of an annoyance that I'd love a fix for.

Edit to add: Thank you for all the work you do on these tools. I use them a ton!

Oh, thanks for reporting that issue with Dissolve. You are probably one of the first people to use my recent full rewrite of that tool, and you found a bug. I'm working on a fix for it and will post again when I've finished it.

Actually, that did not turn out to be a difficult problem to solve.