We have an SDE on SQL Server 17. A user is connecting to the database via OS Authentication using ArcMap 10.7. For them, as they validate topology, the extent at which the validation works is becoming smaller and smaller. At first the validation works at all scales but at some point they are unable to validate at full extent. They are able to edit and save edits on the feature classes for which they are validating topology so it doesn't seem like this is truly a permissions issue. Any ideas? 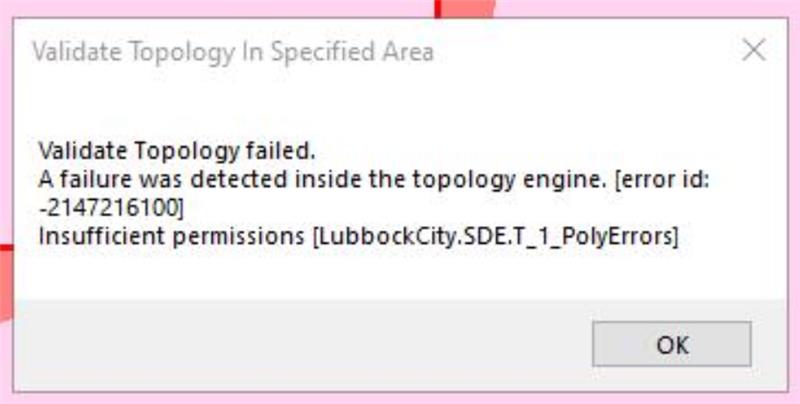 Update: So we tested using a database connection to the SDE (that is using the SDE account rather than OS). Things are working correctly now. Confirmed that data was loaded and topology was created using the database connection. Is there a Topology table, or something like that, where we need to apply the correct permissions?

Are the permissions for those OS users / groups granted to the Feature Dataset that includes the topology?

Is the Feature Dataset versioned?

If so, are the users editing within their version?

If not, I wonder if multiple people are trying to edit the topology at the same time?

Yes permissions are granted to the Feature dataset to the user that is experience this issue. Dataset was versioned after creating topology. We tested with the Default and Child versions with the same error.

I will double check to make sure no one else is working with the Topology at the same time but my guess would be no. It's only me and the user experiencing this issue that are working in this geodatabase.

Ok, if the data is versioned it should not matter how many people are working in the data.

It seems that a permission did not get applied to the user on that table behind the scenes.

Can you try this:

1. remove the user/group permissions, then close out of the ArcGIS client