I am attempting to import  feature classes in a fgdb  into an enterprise database. ArcGIS for Desktop 10.3.1. Enterprise Databases in SQL Server 2014. Two of the features classes are large.

I am replacing existing feature classes in the enterprise database by attempting to import the new  and when succesfully imported and tested remove the existing and rename the new feature classes to those of the originals. Enterprise database properties that I can view in SQL Server Management Studio are ROWS Data: Initial Size 104,024 MB and Autogrowth/Maxsize  is 10%, unlimited. LOG: Initial size 74,248MB, Autogrowth/Maxsize 2,097MB,152MB.

Previous methodology was to merely delete the original feature classes and import the new. I am being more cautious in wanting to import the new and retain the existing until tested. The fgdb feature classes that I want to import I can load into ArcMap and view without error. I am using a dataloader connection that has insert permissions and I have tested successfully importing other objects into the enterprise geodatabase.

Could amending the  Autogrowth/Maxsize properties on the enterprise geodatabase resolve the issue?

I have tried to copy and paste into the enterprise geodatabase connection. It provided data transfer progress. Yesterday it appeared to copy all features:

but ArcCatalog  hung for several hours  after displaying all features had been copied and the desktop slowed down  until unusable. A forced crash of ArcCatalog was required and there was no imported featured class: 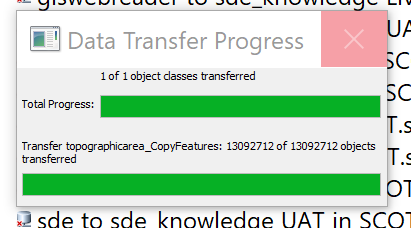 2nd and 3rd attempts show some progress in transferring features then I get a Paste failed error: 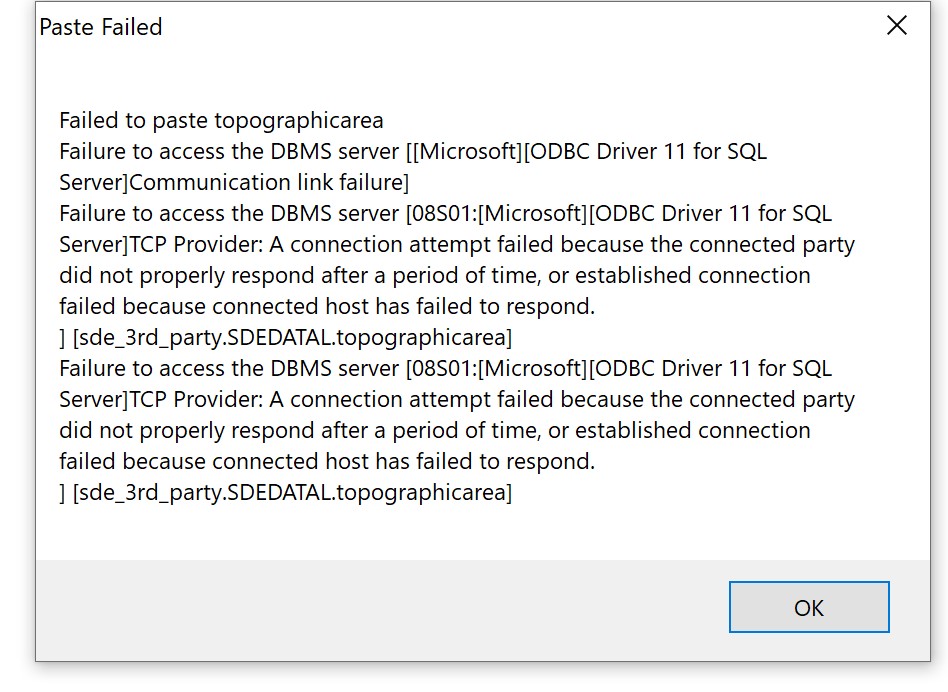 Have you checked or verified data using "Check geometry" geoprocessing tool just to make sure data is good before importing. Check for any custom triggers and locks on the table  which may cause this error.

Other option apart from copy/paste is to create an empty schema enterprise geodatabase and append data.

If you still find the issue then open the SQL Server  profiler and check the error or last activity when import failed.

I will attempt your other suggestions of creating an empty schema enterprise geodatabase and appending the data. Thank you